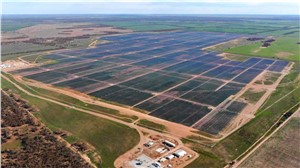 The long delayed Sunraysia solar farm near Balranald in south-west New South Wales has finally obtained its registration from the Australian Energy Market Operator and will begin production this week, possibly as early as Tuesday.

Sunraysia, majority owned by UK infrastructure investor John Laing (90.1 per cent), with Australian-based Maoneng holding the rest, had been expected to join the grid last year, but has been held up by undisclosed technical issues.The delays have led to claims and counter claims for damages between the owners and the contractors, and the inverter providers Schneider Electric.

AEMO advised Sunraysia late last week that registration had been approved, and generation would be allowed from Tuesday, November 10, at all 104 of its units. It will then move through various “hold points” over the coming months before reaching full capacity.

The registration and production will also help Maoneng move forward with a proposed 50MW/100MWh big battery at Sunraysia, part of a 200MW/400MWh portfolio of battery storage that Maoneng has agreed to develop for AGL, which also buy the output from the solar farm.

“We seem to have a habit of getting assets connected in November,” Han said in an emailed statement. “Mugga Lane Solar Park was registered and outputting on the 18th of November 2016 (almost 4 years ago!), which coincided with one of a few rare events of NSW spot prices hitting VOLL (market cap).

“I think it is auspicious in some ways to have reached such a milestone following the outcome of the US Election where that will no doubt drive an even bigger appetite and global awareness for renewable energy.

“I am grateful for the combined effort of everyone that’s been involved till date which has allowed us to achieve this important milestone. It’s the beginning of the life of a long term asset that will no doubt play a meaningful part in the Australian energy transition.

“Maoneng has a long term asset management role for this project and we will do our best in making sure that this asset is kept well and is performing to the standards required of everyone here in Australia.”

The delays at Sunraysia, and congestion issues which will impact its wholly owned 170MW Finley solar farm west of Wagga Wagga, caused John Laing to remove the solar part of its Australian renewable energy portfolio that it put up for sale because of frustrations over the changing rules and regulations over connections, transmission and policy in Australia.

The wind portfolio, which includes the Cherry Tree and Kiata wind farms in Victoria, the Granville wind farm in Tasmania, and stakes in the Hornsdale wind farms in South Australia was sold last week to First Sentier.

The solar portfolio will be put on the market once there is more clarity around the grid issues in the south-west of NSW, where Transgrid has warned of curtailments due to grid congestion, and where AEMO has effectively put up the “house full” sign until further network infrastructure is built.

Sunraysia is just one of a number of wind and solar farms to have been built, and then delayed by connection and commissioning issues.

The Kennedy hybrid wind, solar and battery hub has not received its registration, and other big plants such as Bungala solar farm in South Australia and Dundonnell wind farm in Victoria were connected, and then held back by the operator, and numerous others have had their connections delayed because of grid congestion and system strength issues.

The delays at Sunraysia have also sparked a court dispute between Sunraysia and Decmil, the main EPC contractor, over who should incur the cost of the delays. Decmil and Sunraysia have made large claims and counter claims, and Decmil has also taken action against the inverter manufacturer. Transformers have also been cited by John Laing as one of the issues.

Both Decmil and John Laing have announced write-downs of various sizes because of the delays. However,  registration for Sunraysia has still arrived earlier than recent warnings that it could be delayed until next year.