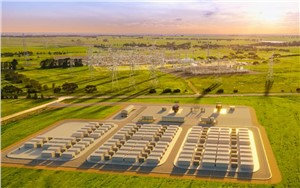 French renewable energy developer Neoen has won a contract held by the Victoria government to the build the biggest battery in Australia in Geelong, providing essential services to the Victoria grid.

The 300MW/450MWh Victorian Big Battery will be more than twice the size of the 150MW/194MWh Hornsdale Power Reserve, which was until recently the biggest battery in the world, and was recently expanded to add new synthetic inertia and other key grid services to South Australia.

Like Hornsdale, the new Victoria battery will also be built by Tesla, but in this case using the new 3MWh Megapacks, which Tesla says can deliver a major peaking plant four times quicker than traditional fossil fuel projects.

The cost of the Victoria project has not been revealed, but will be borne by Neoen. It will, however, be paid a “service charge” of $12.5 million per year for a 250MW and 125MWh component under a 10 year contract with the Australian Energy Market Operator.

The Victoria big battery’s primary role will be to participate in Victoria’s System Integrated Protection Scheme, which like the Hornsdale battery will put it at the front line of providing grid security, thanks to the battery’s speed and flexibility, and allow for an increase in operating capacity on the main transmission link between Victoria and NSW.

The big battery will be operational by the end of 2021, and sited next to the Moorabool Terminal Station in Geelong, as flagged by RenewEconomy last month.

AEMO says the battery will unlock  an additional 250MW of peak capacity on the existing Victoria to New South Wales Interconnector (VNI) over the next decade of Australian summers, reduce the amount of “unserved energy” and deliver total benefits of more than $220 million to Victoria consumers.

“Under the contract, the battery will provide an automatic response in the event of an unexpected network outage, providing AEMO with an additional means of ensuring grid stability,” the statement said.

“Batteries are genuinely well suited to perform this service because they can respond in a fraction of a second. The battery will also participate in the National Electricity Market and support increased penetration of renewables in Victoria through network services such as fast frequency control.”

Victoria energy minister Lily d’Amrbosio said the Victorian Big Battery will help to modernise and stabilise the grid in Victoria and will be instrumental in helping the State reach its objective of 50 per cent renewables by 2030.

“By securing one of the biggest batteries in the world, Victoria is taking a decisive step away from coal-fired power and embracing new technologies that will unlock more renewable energy than ever before,” she said.

Her statement noted that “independent analysis” shows that for every $1 invested the battery will deliver more than $2 in benefits to Victorian households and businesses. Neoen’s Hornsdale Power Reserve, for instance, has delivered more than $A150 million in savings in its first two years of operation.

“We are delighted to have won the SIPS contract and would like to thank AEMO and the Victorian Government for placing their trust in us,” Louis de Sambucy, the head of Neoen Australia, said in a statement.

“We are looking forward to working once again with Tesla and AusNet to deliver this world-leading battery storage facility over the coming months. We are extremely proud to be launching a project of this scale and innovation in support of Victoria’s clean energy transition.”

It is the latest big victory for Neoen, which has won tenders in the last few months with the ACT government for the first stage of the huge Goyder South project in South Australia, and a big battery in Canberra, as well as wins with CleanCo for the country’s biggest solar farm in Queensland and a new wind farm in the north of the state.

“We are fiercely proud to be at the forefront of this vital element of the energy transition. We will continue to build on this experience to deliver world-leading solutions that help to shape and transform the grid of the future for the benefit of industry and consumers across Australia and around the globe.”

The Victoria government said construction of the battery will create more than 85 jobs, and help reduce wholesale prices – and people’s power bills – by storing cheap renewable energy when the weather makes it plentiful and discharging it into the grid when it is needed most.

Victoria already operates two big battery projects – one at the Gannawarra solar farm (25MW/50MWh) and the other at the Ballarat network junction (30MW/30MWh), while a third, built by Neoen and Tesla at the Bulgana green power hub (20MW/34MWh) in north west Victoria, is already built and soon to be commissioned.

In South Australia this week, the state Liberal government announced a new 10-year electricity supply contract that will see the 100MW/100MWh Playford big battery built at Port Augusta, while the Northern Territory also opened the formal tender process for the 35MW Darwin big battery with around half an hour storage.

Last month, Transgrid announced it would build a big battery in western Sydney, to be operated by Infigen Energy, the 50MW/75MWh Wallgrove big battery, that would be the first in Australia to feature Megapack batteries.