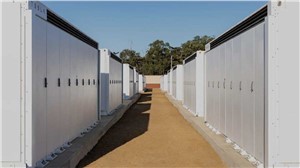 Transmission company Transgrid is to build the first big battery in Australia using Tesla’s recently introduced Megapack battery technology, and what is likely to the first of more than 10 big batteries to be built across NSW as it prepares for the retirement of its ageing coal fleet..

The Wallgrove Grid Battery will be located at the Wallgrove substation in western Sydney and will provide fast frequency response and inertia services to the NSW transmission network as well as a synthetic inertia product known as “Virtual Machine Mode”.

At 50MW/75MWh, the Wallgrove battery will be the second biggest in the country – after the highly successful first Tesla big battery at Hornsdale in South Australia that delivered 100MW/129MWh, and was recently expanded to 150MW/194MWh.

It will be the first in Australia to deploy the Tesla Megapack units, which have a capacity of up to 3MWh,  or 15 times bigger than the Powerback batteries used at Hornsdale, Lake Bonney and Gannawarra, and the soon to be commissioned Bulgana battery. The larger size of the Megapacks make installations easier and will support gigawatt scale projects.

Transgrid will own and operate the Wallgrove battery but the battery will actually be dispatched by Infigen Energy, which owns wind assets, as well as a fast-start gas generator in NSW, and also operates the Lake Bonney big battery in Souh Australia, next to its Lake Bonney wind complex.

The $61.9 million battery will receive up to $11.5 million in funding from the Australian Renewable Energy Agency, and another $10 million from the NSW government as part of its $75 million Emerging Energy Program. Infigen will pay lease payments to Transgrid to operate the facility and will pick up the revenue. Construction will begin in February and is due to start operations in October next year.

It will the first of at least a dozen big batteries to be built across NSW, with the state government previously announcing backing for four other big batteries to be built, including at the Sapphire wind farm and proposed New England solar farm, and AGL has already agreed to build four separate big batteries in a deal with Maoneng, and also a big battery of up to 500MW at the site of Liddell coal generator that will close in 2023.

The NSW state government is also providing funding for another half a dozen big battery proposals, and numerous other developers are talking of adding big batteries at existing wind and solar farms. Transgrid also says it is looking for more big battery proposals from third party battery providers to install across its network.

“Energy storage is one of the priority technologies under the Australian Government’s first Low Emissions Technology Statement released last month, and ARENA has already played a key role in supporting the commercialisation of battery storage.

“Large scale batteries have a big role to play in firming and balancing our electricity system as we move towards a future energy mix with higher penetration of renewable energy,” he said.

This is important because solving the inertia problem is one of the main challenges to the transition to renewables. Inertia is normally supplied by synchronous machines, such as coal and gas generators.

If big batteries can deliver the service, as has been proved in smaller applications already at Dalrymple North in South Australia and Alinta’s Newman battery in the Pilbara, then another major problem in the switch to wind and solar is solved.

This is also important for NSW, which is facing the retirement of most of its coal fleet over the next 10 to 12 years.

The Wallgrove Grid Battery will demonstrate the technical capability of batteries with advanced inverter capabilities to substitute traditional inertia. In doing so, TransGrid will demonstrate that batteries can provide the most cost-effective solution for NSW’s projected upcoming inertia shortfall,” Miller said.

TransGrid’s head of strategy, innovation and technology Eva Hanly said it will be the first battery in NSW to pilot grid scale synthetic inertia as a network service.

“It’s a step forward for the NSW grid and the National Electricity Market. This innovation will help accelerate the industry’s transformation to a low-carbon energy system, at a lower cost to customers,” she said.

Infigen CEO Ross Rolfe said the arrangement with Transgrid will allow the company to sell more clean energy to its customers.

ARENA says it has already given financial support to the other existing five grid scale batteries on Australia’s main grid, including the Hornsdale Power Reserve expansion, the Dalrymple and Lake Bonney batteries in South Australia and two in Victoria at Ballarat and Gannawarra.

The move by Transgrid is yet more evidence of the interest of networks in moving into battery storage investments. Western Power is installing “community scale” batteries of around 500kWh around its network, and Ausgrid and United Energy are proposing to do similar additions with battery storage of varying sizes to improve the ability of their networks to absorb rooftop solar and other renewables.

In a later statement, Transgrid provided this explainer:

“The power system currently relies on inertia provided by large spinning turbines inside coal, gas and hydro generators to maintain a consistent frequency and help the system ride out any disturbances. As coal-fired generators retire and more wind and solar generation connect to the grid, alternate sources of inertia will be needed to stabilise the network.

“Batteries offer a solution to this challenge at a small fraction of the cost of traditional technologies such as synchronous condensers. HoustonKemp has assessed the direct benefits to NSW electricity customers of this trial to be within a range of $93m to $135m.

“Research and results from the trial will be shared to support future projects and help demonstrate that battery technology is a low cost and technically viable solution to the emerging challenge created by the transformation of the generation sector. Additionally, the trial will provide a foundation for third-party battery providers to submit credible options to TransGrid in future relevant regulatory investment tests for transmission (RIT-T).”