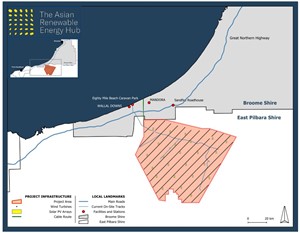 The Western Australian government has granted state environmental approvals to the massive first stage of the Asian Renewable Energy Hub, which proposes to build up to 15,000MW of new wind and solar power in the state’s Pilbara region and has expanded its long term plans to an extraordinary 26,000MW.

It is a major step toward the project becoming a reality, with the McGowan government giving the project environmental clearance for the first 15,000MW stage of the project, to be built across 6,500 square kilometres in the Pilbara region, as the developers seek to capitalise on an emerging market for Australian renewable energy exports, including green hydrogen.

The project would be a major paradigm shift in both Australia’s energy exports and the development the local clean energy sector, building a project at unprecedented scale and targeting the production of clean energy for international users. The project would be by-far Australia’s largest energy development, and would require as much as $30 billion in investment to fund its construction.

The first stage of the project is expected to see 10,000MW of new wind generation, along with an additional 5,000MW of solar generation capacity built. Most of the project will be located within the Shire of East Pilbara, with an infrastructure corridor proposed to pass through the Shire of Broome, linking to an offshore export terminal.

The project is looking to use the mix of wind and solar capacity to provide a steady supply of zero emissions electricity, with the project expected to produce predominantly solar power during the day, while tapping into overnight winds to supply power at night.

At least 3,000MW of the initial first stage will be used to supply power to the Pilbara region, which includes a number of Australia’s largest industrial energy users.

Ultimately the project will look to supply power into the Asian region, with developers saying that there was more than enough demand for new electricity projects within the Asian region to support up to 26GW at the Asian Renewable Energy Hub as well as the 10GW Sun Cable project being backed by Mike Cannon Brookes.

Project is expected to create up to 5,000 construction jobs over the first 10-year years of the project, as well as around 3,000 ongoing jobs over its expected 50 year operational life.

The project has been welcomed by the Western Australian government, which is looking to support the creation of new industries that can draw upon the state’s ample supplies of renewable energy resources, and wants to position the stage as a leading global exporter of green electricity and hydrogen.

“The Asian Renewable Energy Hub could transform the Pilbara, create thousands of jobs and be a major contributor to global efforts to decarbonise the economy,” Western Australian regional development minister Alannah MacTiernan said.

“This development will demonstrate Western Australia’s credentials as a world-class investment destination for green energy generation, including the production of exportable commodities, like green hydrogen and ammonia, and green steel manufacturing,” McTiernan added.

“It will put Western Australia on the map as a major contributor to lowering global carbon emissions.”

The project is still likely to require approvals under federal environmental laws before construction can commence.