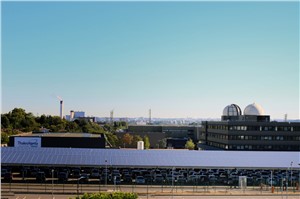 Thales Alenia Space, the joint company between Thales (67%) and Leonardo (33%), announced today it has installed a complete set of solar carports at its Toulouse facility, which are now online and generating electricity. This first sustainable parking installation will be replicated at other company sites in Europe between now and 2021.

Thales Alenia Space chose EDF Group subsidiary EDF ENR to install its French-made solar carports at the Toulouse site. Now a feature of one of the main parking lots at the site, the carports have a combined surface area of 8,400 square meters (over 90,400 sq. ft) and will produce 1.8 gigawatt-hours of electricity a year, which will be used at the facility. This equates to 6% of the site’s total consumption. Thales Alenia Space’ Toulouse plant has thus inaugurated a new generation of sustainable parking lots, which will reduce its CO2 emissions by 25 metric tons a year. The carports offer space for 640 vehicles, which will be protected from rain and sun.

These solar carports are a sustainable and profitable investment for Thales Alenia Space. They were installed under a 10-year lease/purchase contract with EDF ENR for the canopies and the solar array, with a fee equivalent to the amount of electricity produced. Thales Alenia Space in Toulouse is now producing clean, carbon-free energy, which will all feed into the site. Ownership of the installation will transfer to the company in 2030. A second solar parking lot will be built in the next few months, taking green energy production to 10% of the site’s total consumption.

Commissioning these carports at the Toulouse site is a pioneering project for Thales Alenia Space. Similar initiatives are in progress at some of the company’s other Europe facilities, including Cannes, where 5,400 square meters (over 58,000 sq. ft) of solar panels are being installed. They will produce 1.3 gigawatt-hours of electricity a year, equivalent to 4% of the site’s total consumption. By 2021, five Thales Alenia Space facilities in Europe will have solar parking lots: Toulouse and Cannes in France, Charleroi in Belgium and L’Aquila and Turin in Italy. Together, these new-generation parking facilities will generate 6.58 gigawatt-hours a year, reducing the company’s CO2 emissions by 1,031 metric tons.