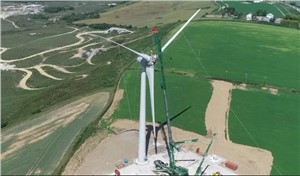 A trial to test the concept of using a wind turbine to help smooth peaks and troughs in electricity supply and demand on the grid began earlier this month.

Located in Cornwall in the southwest of England, the 2.3-megawatt turbine will generate enough electricity to power around 1,500 homes each year. But it will also test a solution to an issue that is increasingly affecting the U.K.’s clean energy transition: grid constraint.

Cornwall is one of the sunniest and windiest regions of the U.K., and its high levels of renewable energy capacity have resulted in severe grid constraints. It is one of the reasons why no wind turbines have been installed there since 2016, alongside planning restrictions and the removal of government subsidies to the sector.

Traditional network reinforcement is an expensive and lengthy process. However, utility Centrica has been leading trials to find more cost-effective solutions to grid constraints that boost the business case for renewable energy generation and storage at the same time.

Centrica's Cornwall Local Energy Market (LEM) project has installed solar panels, battery storage units and other smart energy devices at 100 homes and 125 businesses across the county. These provide the network with flexible demand, generation and storage when requested.

The turbine in Cornwall is part of these trials. Using an Enercon E82 E4 machine, the project team aims to be the first in the U.K. to demonstrate the concept of making small adjustments in output to help smooth peaks and troughs in electricity supply and demand on the grid.

Dan Nicholls, program manager for the Cornwall LEM, explained that the Enercon E84 turbine had some specific features that make it well equipped for a demonstration of demand-side response from the LEM.

“It’s gearless and it's a variable speed turbine, which are the key characteristics that allow it to ramp very fast. It can decouple from the AC frequency of the grid, then reset the frequency in alignment with the grid frequency,” Nicholls said in an interview.

“This combination of technologies is what allows the turbine to ramp very quickly and gives us the opportunity to trial a [demand-side response] service,” he said.

Ending curtailment
As well as freeing up capacity on the grid to allow the connection of more renewable energy, the provision of a demand-side response service could improve the business case for wind turbines. Currently, when renewable energy generation is producing in excess of what the grid requires, the distribution network operators have to ask generators to curtail production, an action for which they are not compensated financially.

Instead, ramping the wind turbine down by a small amount to balance the network as a paid-for service has the equivalent effect on the grid to increasing demand, Nicholls explained, and removes the need to fully curtail its energy output.

“The trial will help us prove that case. We want to use renewable energy as part of our dynamic network rather than the blunt hammer of just curtailing the energy if there’s too much,” he said.

David McMullin from Enercon’s grid integration team commented that it was rare to see the technical features of the German manufacturer's turbines used to their full potential as was proposed for the Cornwall LEM trial; he sees potential for the project to unlock more value from local renewable generation.

Similar technology is being used in other markets around the world to provide flexibility for power system operators, but such projects typically involve large wind farms generating tens of hundreds of megawatts, McMullin said.

“There are not as many opportunities for small wind farms to provide flexibility in this way. The technology is there, but in most cases, we see that the routes to market are simply missing. We hope that projects like Ventonteague will raise awareness that even a single wind turbine can provide this kind of benefit to the power system,” McMullin said in an interview.

Centrica contributed £1 million ($1.3 million) in funding for the project and has constructed and commissioned the infrastructure that will connect the turbine to the grid and the LEM. Cornwall Council invested £3 million and will own and operate the turbine as part of its plans to make the county carbon-neutral by 2030.

Gareth Davies, senior low-carbon investment officer in Cornwall Council’s economic growth service, told GTM: “Grid-balancing is potentially a cleverer way of dealing the constraints rather than the government having to step in and commit to fairly large grid reinforcements. If that does unlock more capacity in Cornwall, it’s certainly something we’re keen to explore.”

The trial of the flexing technology will take only a couple of months, with the results published alongside the results of the whole LEM project in November.

Tell a friend:
How a Single UK Turbine Could Prove a New Use Case for Wind Power