Largest and Most Efficient Gas Turbines Will Power 1.2 Million Homes 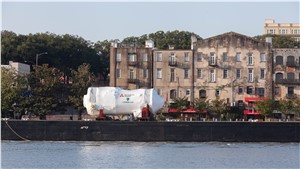 Mitsubishi Power shipped the first JAC gas turbine manufactured in America to J-POWER USA Development Co. Ltd. (J-POWER USA) for its 1,200 megawatt (MW) Jackson Generation project in Elwood, Illinois. This project supports the state’s commitment to renewable energy by providing efficient, flexible generation that complements additional wind and solar energy and reduces Illinois’ dependence on coal-fired generation. The M501JAC gas turbine in transit to Illinois is the first of two that Mitsubishi Power’s Savannah Machinery Works is manufacturing for the project and will be the first M501JAC installed in North America.

The Jackson Generation project’s combined-cycle power plant will be dispatched into the PJM regional transmission organization. It will help modernize and diversify Illinois’ power grid while generating enough electricity to power 1.2 million homes.

When the plant enters commercial service in 2022, it will be one of the world’s most fuel-efficient natural gas power plants, offering among the lowest carbon emissions of any combined-cycle plant. The project will produce 65 percent less carbon dioxide than a legacy coal-fired power plant. Because the plant is designed to enable more uptake of renewable power, the carbon reduction will be even greater when the plant is combined with renewables. The plant will be able to cycle quickly to meet fluctuating energy demands. It also will incorporate best available control technology to minimize emissions.

Introduced nearly a decade ago, the J-Series gas turbines, which are Mitsubishi Power’s largest and most advanced, deliver an unmatched combination of 99.6 percent reliability and greater than 64 percent efficiency. The fleet has logged more than 1 million operating hours globally.

The original steam-cooled M501J design was upgraded with an enhanced air-cooled configuration in 2015. Since then, the JAC has logged more than 20,000 operating hours and 1100 starts, and has been verified at Mitsubishi Power’s grid-connected T-Point 2 facility in Japan. Mitsubishi Power’s rigorous verification process ensures high reliability both during start-up and once the turbine enters commercial service.

“Shipping the first M501JAC manufactured in America for the J-POWER USA project in America’s heartland is a significant milestone,” said Paul Browning, President and CEO of Mitsubishi Power Americas. “Our highly trained team of professionals in Savannah is yet another reason Mitsubishi Power is a world leader in the electric power sector. Not only will our turbines enable Jackson Generation to provide efficient, reliable and environmentally responsible electricity to consumers, but they also will help the plant support deployment of even more renewable energy resources. That is a Change in Power.”