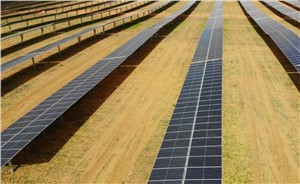 Kiamal – majority owned by European joint venture Total Eren, with the Clean Energy Finance Corporation owning a small stake – is by far the biggest solar project in Victoria, and one of the biggest in the country, but has been delayed by a combination of issues that have affected the region – grid congestion and system strength concerns – as well as contractor problems at its own site.

Kiamal, located near Ouyen, was one of the first large scale renewable energy projects, and the first big solar project, asked to install its own “synchronous condenser”, a massive machine that delivers rotating mass and is designed to ease system strength concerns. That machine is also now operating.

But Kiamal was also caught up in the connection delays that affected wide areas of the West Murray region – with some operating solar restricted to half their output for seven months due to voltage issues, and nearly two dozen other projects forced to queue for their connections as the market operator took a cautious approach to new connections.

RenewEconomy understands that Kiamal was officially registered last week, sent its first export to the grid on Friday, and will shortly move to its first “hold point” of 10 per cent. These “hold points” are stepping stones that must be followed to satisfy AEMO that all is well with the plant. The whole commissioning process could take several months.

Total Eren and the CEFC were forced to bring in a new contractor, Beon Energy Solutions in May after the withdrawal of the Greek-based Ellaktor from the project, and after media stories of multiple disputes over delayed payments. It is understood that some remedial work had to be undertaken.

Kiamal has signed off-take agreements with Flow Power, Powershop (at what it said was a stunning low price), and Mars Australia, allowing the food manufacturer to go 100 per cent renewables for its entire Australian business, which includes 6 factories.

A second stage at Kiamal is also planned, possibly another 150MW, after signing a major off-take agreement with Snowy Hydro – making it one of the eight projects that formed part of Snowy Hydro’s boast that it had secured “firm” wind and solar for well below the current price of wholesale power in Australia.

The synchronous condenser is believed to have signed a contract with AEMO to provide system strength services to the West Murray region, although AEMO has chosen not to disclose the details of the contracts.

Kiamal is the first large scale project by Total Eren in Australia and had expected to be in service late last year.