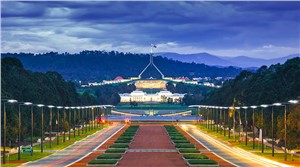 Canberra is set to become host to two big battery projects, with the ACT government announcing that two companies that will supply additional 200MW of wind power to the national capital at record low prices will also both build big batteries within the ACT.

The ACT government revealed the two successful bids from its latest reverse auction on Tuesday morning, securing long term off-take agreements to two 100MW wind power developments, with an additional 60MW of big batteries to be located in Canberra.

Neoen will supply the ACT with 100MW of wind power from the first stage of its massive Goyder Renewables Zone in South Australia, along with a 50MW battery in the ACT. The price it bid is a record low for Australia wind projects.

The ACT government’s auction requirements specified that just 20MW of battery capacity in total would be sought under the auction, but Neoen opted to build a bigger asset, following the success of the Hornsdale power reserve in South Australia, and may expand the facility to 150MW with one or two hours storage.

Global Power Generation was the other successful bidder and will supply 100MW of wind power from the second stage of the Berrybank wind farm in Western Victoria, along with a 10MW/20MWh battery, also to be built in the national capital.

The reverse auction process successfully delivered prices that were significantly lower than those previously run by the ACT government and the lowest publicly disclosed prices so far in Australia.

Other wind contracts are believed to be in the ballpark of the two bids, but retailers and most governments do not reveal their prices. (Full credit to the ACT for doing so). To put the Neoen price into context, it is equivalent to around $35/MWh at today’s prices, or one half of the average price on the NSW wholesale market in the last year.

No off take agreements have been struck with the big battery systems, with the batteries being a condition of securing the off take contracts for the wind farms, but Neoen and Global Power Generation will be able to sell the battery services into FCAS and energy markets however they wish.

The ACT, however, saw the big batteries as extra security against blackouts “when large fossil fuel generators fail in heatwave conditions.”

Both Neoen and Global Power Generation had been successful bidders under prior auctions run by the ACT government, with Neoen CEO Xavier Barbaro saying that the company was pleased to continue its relationship with Canberra.

“Our Australian story began in the ACT and this fourth contract underscores our extraordinary track record in being able to deliver competitive pricing and build robust, innovative projects,” Barbaro said. “We are currently managing all of our Australian assets, including the world’s first big battery, from our Canberra office, and will continue to apple these learnings across Neoen’s growing Australian and international portfolio”.

The big batteries will store the equivalent of an hours worth of power for around 15,000 Canberra households, providing an extra level of insurance in case of a blackout.

The ACT government announced that it would undertake a fresh round of reverse auctions in October last year, and are designed to top-up the ACT’s supplies of renewable electricity to ensure it maintains its status as 100 per cent renewably powered as demand grows.

The territory reached that milestone last year, with the last of a series of wind and solar farms, the third stage of the Hornsdale wind farm, coming online 12 months ago.

ACT climate change and sustainability minister Shane Rattenbury told RenewEconomy that while the ACT has already hit 100 per cent renewable electricity supplies, that with continuing population growth, increased adoption of electric vehicles and a push to see households switch from gas to electric appliances, that the new agreements would help maintain the 100 per cent status.

The ACT’s reverse auction process, which secured long-term offtake agreements with new wind and solar projects, helped to underpin new investment in large-scale generation capacity throughout a period when the Abbott federal government was taking a wrecking ball to national climate policies.

Rattenbury said the latest reverse auctions were about helping to drive further investment in the ACT’s economy, while maintaining the territory’s position as a leader on climate action.

“Canberra is proudly the nation’s climate action capital, and an internationally-recognised global climate action leader. Already, Canberra’s renewable energy and clean tech industries have attracted over $2 billion dollars of investment in large-scale wind and solar renewable infrastructure across Australia, and more than $500 million dollars of investment directly into the Canberra region,” Rattenbury said.

“This will help Canberra maintain 100% renewable electricity into the next decade, see the construction of two large-scale batteries in Canberra, and deliver the best pricing outcome for residents in the program’s history.”

“The batteries will help support the Territory’s own grid, particularly providing power to help avoid blackouts during periods of high demand and when large fossil fuel generators fail in heatwave conditions.”

“These big batteries mean that our small jurisdiction is again punching above our weight when it comes to real climate action. Our investment is on par with the Tesla Hornsdale battery on a per capita basis – the largest investment of its kind in the world,” Rattenbury added.

“We undertake these types of reverse auctions so that the ACT consumer can get best value electricity. This round has delivered the best pricing outcome to ACT households and businesses in the five rounds we’ve held.”

Rattenbury added that under the contracts secured through the latest round of reverse auctions, that successful project proponents would be required to invest in Canberra’s local clean energy sector, which may include investments in education and training facilities, as well as locating key operational offices within the ACT.

The Victorian state government announced that it would also run its own renewable energy tender, seeking expression of interest to supply an additional 600MW of renewable energy generation in the state.