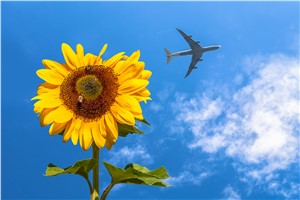 On a quest to break the carbon barrier in commercial flight, a team of scientists at GE Research will design and develop a high-efficiency, carbon-neutral enabling hybrid electric propulsion system that is capable of powering a commercial narrow body aircraft under the eFLITES and FLyCLEEN projects respectively.  These planes are the workhorse of the aviation industry, with more than 16,000 planes flying globally today.

GE Research has been awarded two projects through ARPA-E’s ASCEND and REEACH programs, which are part of $33 million in funding the agency recently announced to support 17 different projects to advance hybrid electric aviation systems technology.  Narendra Joshi, Chief Engineer for Propulsion Technologies at GE Research, says ARPA-E’s programs will greatly accelerate new developments toward a net-zero carbon flight future and notes that many of the answers can be found through innovations made in the energy space.

“In the middle part of the 20th century, GE engineers discovered how to turn a power generation turbine into a jet engine to help propel commercial flight,” Joshi says. “For this new effort, we will be drawing upon GE’s extensive experience decarbonizing the energy sector to break the carbon barrier in aviation.”

As part of the two projects, GE researchers will be partnering with engineers in both its Aviation and Gas Power businesses, as well as US laboratories & academic institutions, to support new developments. The first is a $2.5 million REEACH project focused on developing a multi-megawatt power generation system that turns a carbon neutral biofuel into electricity called FLyCLEEN (FueL CelL Embedded ENgine). The second is a $2.3 million ASCEND project that involves developing the electric drive, or powertrain system, which converts that electricity to mechanically drive the propulsor, called eFLITES (Electric Flightworthy Lightweight Integrated Thermally Enhanced Powertrain System).

Senior Principal Engineer John Yagielski, who is leading the eFLITES projects, says the powertrain system will bring together a multitude of technical capabilities from across GE’s Research Lab and GE’s Aviation and Gas Power businesses, stating, “We’re fortunate to have a critical mass of technical experts and expertise in Schenectady to bring to this endeavor. We will be integrating electric motor, insulation, inverter, thermal management and advanced manufacturing technologies to develop a 2MW powertrain that is capable of supporting a future 150-200 seat narrow body commercial airplane.”

The projects with ARPA-E will build upon other efforts underway by GE Research and GE Aviation to promote hybrid electric systems. Last year, GE Research announced a $12 million program with NASA to develop a next generation inverter that meets the size, power, efficiency and altitude requirements specified by NASA for flight applications. The inverter is a central component of an electric aircraft propulsion system that provides power to drive the electric motor.