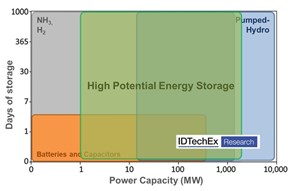 This new class of storage systems include older and newer technologies. It includes elderly technologies like compressed air energy storage, already installed in the 1980s, and some of the younger gravitational energy storage, like in the case of Highview Energy, and Energy Vault recently backed with millions of dollars.

These interesting devices are now entering the electricity market with demonstration projects, to prove the technical concept. The constant integration of variable energy sources will require additional storage devices to stabilize the electricity grid, where the Mechanical Energy Storage device could play a fundamental role.

Electricity is an essential element of modern society, and reaching a stable electricity grid is a fundamental target to improve the economy of each and every country.

The adoption of these innovative devices will surge in the next future, allowing an improvement of the electricity grid, and boosting the integration of variable energy source.