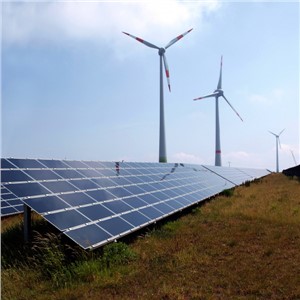 The Company has successfully raised US$620 million in debt to fund construction of phase two of what is one of Latin American's biggest wind and solar generation platforms. This brings to US$1.25bn raised to date by the Andes Renovables platform.

The Senior financing has been provided by a consortium of five banks: IDB Invest, KfW IPEX-Bank, DNB,  CaixaBank and MUFG, and is one of the largest renewable energy debt financing deals undertaken in the world this year. A sixth bank, Santander, provided a VAT facility.

The 630 megawatt (MW) second phase of Andes Renovables – called "Huemul" – is comprised of three onshore wind and two solar PV generation assets. All five assets are in pre-construction and will reach commercial operation between 2021 and 2022. They will generate enough sustainable electricity to power 781,000 Chilean homes and will displace 744,200 metric tonnes of CO2 each year.

Andes Renovables is a c.US$1.8 billion, three phase wind and solar generation platform comprised of seven onshore wind and three solar PV generation assets. The first phase, Cóndor reached financial close in November 2019 and is already over 30% complete. The build-out has created nearly 1,200 jobs across three regions of the country and has safely continued throughout the COVID-19 pandemic under strict sanitary and social distancing protocols. The next and final phase, "Copihue", is comprised of one further wind asset with a 100 MW capacity and is on track to reach financial close in H1 2021.

Vestas, Nordex Group and Siemens Gamesa are supplying the wind turbines and the wind farm assets will be built by Sacyr Industrial, SEMI and Elecnor. The solar PV assets will be built by Sterling & Wilson and Metka-Egn. All five main power transformers for the projects will be supplied by Hitachi ABB Power Grids. Grid connection works will be carried out by Transelec, Inprolec and Isotron-Siemens consortium.

"Reaching financial close on the second phase of our Andes Renovables platform is a further positive step on Mainstream's journey to delivering Latin America's number one wind and solar PV power generation platform.

"Despite the uncertain economic environment caused by COVID-19, today's announcement is testament to the support of the banking consortium of Mainstream as the world's leading independent developer of renewable energy.

"Mainstream is building something much bigger than the sum of its many parts – the Andes Renovables platform is evidence of renewable energy infrastructure on a massive scale and comes at a vital time for Chile as the country looks to invest in a green and sustainable recovery from COVID-19 by decarbonising its electricity system, as well as lowering the price of power generation nationwide."

"This latest milestone comes as we are making excellent progress on the construction of the first phase of the platform and I have been delighted by the response of our teams on the ground to the challenging conditions that the pandemic has created.

"The economic and environmental impact of the platform is very significant and with a development pipeline of 2.7 gigawatts of wind and solar assets in addition to the Andes Renovables platform, Mainstream remains committed to making an even greater contribution to Chile for the foreseeable future.