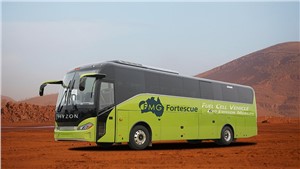 Nine projects will share $22 million in grant funding provided by the Western Australian state government in a major expansion of the state’s renewable hydrogen production capacity.

The funding, provided under the McGowan government’s Western Australian Renewable Hydrogen Strategy, will support WA’s first hydrogen vehicle refuelling station, the expanded use of hydrogen for transport in the resources sector as well as providing money for crucial government reform work.

“The State Government and Renewable Hydrogen Council are keen to see Western Australia accelerate our hydrogen industry through these nine initiatives and the new 2030 target,” Western Australian premier Mark McGowan said in a statement.

“Major export markets are seeking hydrogen much sooner than expected, and we are in a prime position to join the supply chain. Investing in our clean energy future will not only create jobs and training opportunities for Western Australians, but will further diversify our economy.”

Successful grant recipients include gas company ATCO, which will receive $1 million to add a green hydrogen refuelling station to its hydrogen production facility in Jandakot.

Some $5.7 million in funding will be committed to the establishment of a “demonstrator renewable hydrogen microgrid”, in the town of Denham, which will use solar power to produce hydrogen from electrolysis.

Fortescue Metals will receive $2 million in funding, contributing to a $32 million total investment, in hydrogen transport at Fortescue’s Christmas Creek iron ore mine.

Fortescue plans to purchase ten hydrogen fuel cell buses, replacing a fleet of diesel uses, at the iron ore mine, and will establish a solar powered plant for hydrogen production at the site. It will form part of the company’s efforts to achieve a target of net zero emissions by 2040, announced in June. A 60MW solar farm in being built nearby.

The New York based heavy hydrogen vehicle manufacturer HYZON Motors has been selected as the supplier of the fuel cell powered buses, with the company announcing that the buses will be equipped with its higher powered fuel cells, generally used in trucks, to allow for like-for-like performance replacement for the previous diesel fleet.

“Fortescue’s mobile fleet represents around 400 to 450 million litres of diesel consumption per year and presents a significant opportunity for hydrogen to be used as a replacement fuel source to accelerate emissions reduction and diversify our energy mix,” Fortescue’s deputy CEO Julie Shuttleworth said.

Fortescue has previously secured a partnership with ATCO to use hydrogen vehicles as part of its passenger vehicle fleet for the company’s Perth based operations and will utilise the hydrogen fuelling station being built at Jandakot.

The Western Australian government will also use $3 million in funding to develop a regulatory reform package to support the local hydrogen industry, and $2.7 million to expand the Renewable Hydrogen Unit in the Department of Jobs, Tourism, Science and Innovation.

WA regional development minister, Alannah MacTiernan, said that the funding would help position the state as a leader in the emerging green hydrogen industry.

“Interest in renewable hydrogen is rapidly accelerating and our Government is moving to position WA as a world leader in hydrogen production,” MacTiernan said. “Investing in renewable hydrogen and bringing forward our targets sends a clear message to the industry that we are serious about Western Australia being powered by clean energy.”

“The demonstration project in Denham is industry-leading, and has the potential to be rolled out across the State to benefit a wide range of small towns and communities.”

“Boosting our renewable energy sector and giving businesses the confidence to establish themselves through these initiatives will help our State rebound stronger than ever,” MacTiernan added.