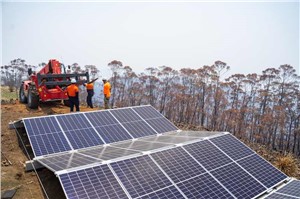 US energy giant AES has anchored the latest fund-raising round for Australia solar start-up 5B, which has developed rapidly deployable solar technology that could be used to build the world’s biggest solar farm in the Northern Territory.<

The Sydney-based 5B has developed the revolutionary Maverick design system that enables solar to be deployed three times faster than conventional solar arrays, and deliver twice the output from the same geographic footprint.

The $US8.6 million funding round will enable it to rapidly scale up its operations.

5B has deployed only around 10MW of solar to date, but it has already been named as the preferred supplier for the giant 10GW Sun Cable solar project in Northern territory that is backed by billionaires Mike Cannon-Brookes and Andrew Forrest. It has also supplied the solar for Cannon-Brookes energy resilience initiative to help provide off-grid power to bushfire victims.

The Virginia-based AES, with a market worth of $US60 billion and more than 35GW of generation capacity, is also a joint partner in Fluence, one of the biggest battery storage technology companies in the world, says total global investment in the solar energy market between 2021-2025 is projected to reach $613 billion as companies transition to greener sources of energy.

5B CEO Chris McGrath, who co-founded the company in 2013, told RenewEconomy that the investment would help it roll out its technology at a more rapid pace, and grow its manufacturing options and country representations.

“Now we have the world as our oyster,” McGrath said. “We have a very attractive technology and a cost roadmap. We have a vision for way we build solar farms as being the next generation beyond what we do now.

“We have transformed delivery of solar projects from the ground up with our flagship technology, Maverick, a plug & play, prefabricated solar block that is folded up, packed onto a truck, shipped to site and deployed in minutes.”

AES president Andrés Gluski said 5B’s technology would be used across many of the projects that will make up its expected 2 to 3 GW of annual renewables growth.

The first deployment will be in Panama, with a 2MW project, and this will be followed by a 10MW project that will expand its Los Andes solar facility in the Atacama Desert in the north of the country.

“5B’s Maverick design enables companies to make that transition more quickly and while using less land,” AES says, noting that Maverick is a pre-wired, prefabricated solar solution that is folded up, shipped to site and rolled out.

“The 5B approach streamlines engineering, procurement and construction for ground-mounted solar facilities. Maverick also removes common barriers for organizations to deploy solar resources, including the availability of land and ground penetration, making solar possible in more places while providing the flexibility to easily relocate the resources in some applications. ”