We are not just going to tinker around the edges, says the Democratic candidate, promising historic investments in solar, wind, batteries and transmission. 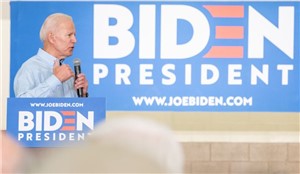 Joe Biden, the presumptive Democratic presidential nominee, further detailed the clean energy and infrastructure plans he would pursue if elected, including $2 trillion in spending over four years.

The $2 trillion pledge is a big increase over the plan Biden unveiled during the Democratic primary, in which he outlined clean energy spending of $1.7 trillion over a decade. The Biden campaign has also significantly shortened the timeline in which it would work to achieve 100 percent clean electricity nationwide, moving from his initial target of 2050 during the primary to a new deadline of 2035.

Last week, a coalition led by Biden and Senator Bernie Sanders released a set of policy recommendations meant to set the agenda for a Democratic White House. That plan includes carbon-free power by 2035, as well as a “moonshot” effort on transmission lines, battery storage and other clean energy provisions.

The newly announced $2 trillion investment would be concentrated in nine areas of the economy, according to a plan Biden’s campaign released Tuesday as part of a larger infrastructure plan, including the power sector, buildings and the auto industry. Spent over four years, the sum would significantly expand the less than $100 billion annually that currently goes to clean energy technologies.

Biden’s plan, outlined in a speech delivered from his home state of Delaware on Tuesday, does not embrace all of the elements of the proposed Green New Deal. Still, the changes indicate that environmental activists and party progressives have succeeded in pushing the Biden campaign toward more aggressive policies.

Putting these more ambitious goals to paper is no small feat, but accomplishing them will be another huge lift. Biden will need to win the presidential election, and Democrats will have to reclaim a Senate majority for many of the plan's policies to stand any chance of implementation, though market forces are already pushing significant proliferation of renewables across the country.

Economic upheaval in the United States could make some change easier, however. Biden noted that recovery from the current public health crisis and the current economic crisis must be undertaken together.

Biden would pay for parts of the plan by reversing tax cuts the Trump administration and Republicans passed in 2017 and raising taxes for affluent Americans, CNN reported. The former vice president’s administration would raise the corporate tax rate to 28 percent, higher than the current 21 percent but lower than the 35 percent rate that existed prior to the 2017 Tax Cuts and Jobs Act.

Should Biden take office, his clean energy agenda will likely echo legislation that defined his first round in the White House. The Obama administration fought the Great Recession in part by including clean energy in its 2009 stimulus package.

“President Obama and I inherited an economy in free fall,” Biden said. “We made the largest investment in clean energy in the history of the United States of America: $90 billion. And it put us on a path toward a thriving clean energy economy.”

“Here we are now with an economy in crisis, but with an incredible opportunity.”

“We’ll do it again, but this time bigger and faster and smarter,” Biden said. “We’re not just going to tinker around the edges. We’re going to make historic investments that will seize the opportunity and meet this moment in history.”

Millions of solar panels, tens of thousands of wind turbines

To achieve 100 percent carbon-free electricity by 2035, Biden proposed extending clean energy and efficiency tax credits as well as installing millions of solar panels and thousands of onshore and offshore wind turbines during his first term. In 2019, fossil fuels still accounted for nearly 63 percent of U.S. electricity generation, according to the Energy Information Administration.

Adding millions of solar panels should be relatively simple; last year utility Florida Power & Light pledged to add 30 million solar panels in the state by 2030, which equates to about 10.5 gigawatts. There are currently about 51 gigawatts of large-scale solar in development in the U.S., according to Wood Mackenzie.

Installing tens of thousands of onshore wind turbines is also achievable. The U.S. already has 60,000 operational turbines and around 100 gigawatts of installed capacity, according to the Department of Energy. Last year the industry added 3,581 turbines, amounting to just over 9 gigawatts. WoodMac analysts already forecast about 32 gigawatts of onshore wind to be installed in the next presidential term, and at typical turbine capacity, 30 gigawatts is equivalent to about 10,000 turbines. Any permitting changes to expand that number would likely only expand deployment in 2024, however.

A goal of installing "thousands" of offshore turbines will be more difficult to achieve. Though East Coast states are prepping to build more than 25 gigawatts of offshore wind by 2035, the U.S. has just one project operating and another that has just finished construction, and the sector has been caught up in delays both before and during the coronavirus pandemic.

To transport the electricity all those renewable energy plants would produce, Biden proposed using existing rights of way along roads and railways to ease transmission permitting, long an onerous obstacle to siting renewables. A 2018 DOE report showed just 1,248 circuit miles of transmission expected for completion between 2021 and 2025. To reach 100 percent renewables — a more ambitious target than Biden’s — would require adding about 200,000 miles of high-voltage transmission, according to analysis from WoodMac.

The Biden plan also calls for the development of grid-scale energy storage at one-tenth of the price of lithium-ion battery prices. The latter technology has seen prices drop 85 percent in the last decade, and WoodMac expects declines of another 35 percent over the next five years. Achieving a similarly precipitous drop in the price of large-scale storage is a challenge, analysts say, but not an impossible one.

“We've seen that 90 percent price declines for batteries are feasible — it's just a question of creating momentum,” said Dan Finn-Foley, WoodMac’s head of energy storage research. “Priming the pump and jump-starting that learning curve with direct investment has worked before for batteries along with other renewables technology. I have no reason to believe it wouldn't work for next-gen stationary storage.”

Under Biden’s plan, 40 percent of all benefits and spending related to clean energy, housing, transportation and other sectors should go to disadvantaged communities. Biden released an updated environmental justice plan alongside the clean energy plan.