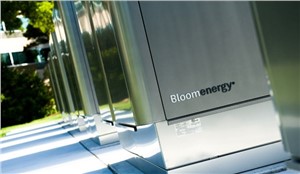 Shares of Bloom Energy surged nearly 35 percent on Wednesday, lifting the fuel-cell maker above its initial public offering price for the first time since 2018, after the California-based company announced it would enter the commercial hydrogen market.

Bloom’s core product is its Energy Server, which converts natural gas into electricity through an electrochemical process without combustion, reducing carbon emissions compared to conventional gas-fired power generation and doing away with other forms of air pollution entirely.

A single Bloom Energy Server system can deliver 250 kilowatts of power, enough to meet the needs of a typical big-box retailer, and takes up only half as much space as a standard 30-foot shipping container — making it vastly more space-efficient than on-site solar generation.

With interest in green hydrogen as a decarbonization tool growing around the world, Bloom last year announced that its Energy Servers could be upgraded to run on hydrogen, or a combination of hydrogen and natural gas. Now, Bloom says it will begin offering electrolyzers to make the renewable hydrogen in the first place.