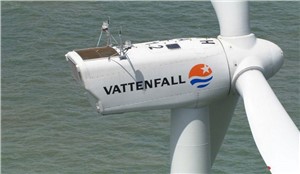 The U.K. government has approved Vattenfall’s 1,800-megawatt Norfolk Vanguard offshore wind farm, but Ørsted will have to wait until December for approval of its next U.K. project, the 2,400-megawatt Hornsea 3.

The projects, both off the east coast of England, represent more than 10 percent of the U.K.'s ambitious 2030 goal of installing 40 gigawatts of offshore wind.

Norfolk Vanguard’s planning application was assessed by the national Planning Inspectorate. The body made its recommendations to the government in September 2019. A decision from the government was expected three months later. It is slated to start generating power in the "mid-2020s," according to Vattenfall.

Recommendations on the 2,400-megawatt Hornsea 3 project were made in July 2019, and again, a decision was expected three months later. The Department for Business, Energy and Industrial Strategy has said it is likely to approve the project once further marine conservation plans are submitted. Its neighboring wind farm, Hornsea 1, became the world's largest in October last year when the final turbine of the 1,218-megawatt project was installed.

Turbine model decisions have not been made for Norfolk Vanguard or Hornsea 3, the developers said.

Danielle Lane, country manager and head of offshore wind for Vattenfall in the U.K., praised the project’s contribution to emissions reductions and local job creation.

“This is a great step forward in the battle against climate change, to increase jobs and skills in the east of England, and for the offshore wind industry as a whole,” she said in a statement.

“They can look forward to a multibillion-pound economic boost, bringing with it hundreds of new long-term jobs, driving forward a green revolution and helping to level up U.K. opportunities,” she said, invoking the "level up" rhetoric that Prime Minister Boris Johnson has used repeatedly.

A further update is expected next week on the U.K.’s stimulus plans. Johnson has so far backed infrastructure spending, particularly for housing, with a new mantra of “build, build, build.”

U.K. lagging on its ambitious offshore wind targets
The approval of Norfolk Vanguard is a welcome boost for the market, but it's understandable why Ørsted could be experiencing some anxiety. The Danish developer will be looking to win a contract for difference in the U.K.'s next auction round; any such winners must complete their projects no later than 2027. But as of 2018, Ørsted did not expect to complete Hornsea 3 until 2025 at the earliest — and it's still waiting for its approval.

Last month, Vattenfall’s Thanet Extension project was rejected outright after its 340 megawatts of capacity were deemed to interfere with shipping lanes. The extension would have added to the existing 300-megawatt Thanet wind farm.

An Ørsted statement said that while it was pleased to have made some progress with the tentative notice of approval, it was disappointed by the delay.

“Climate change is a defining challenge of our time and there is an ever-pressing need to act. Hornsea 3 is a major infrastructure project which responds directly to the urgent need for low-carbon generation at scale in the U.K. and can contribute to a green economic recovery,” a spokesperson said in an emailed statement.

Offshore wind development is not as nimble a process in the U.K. as it is for solar and onshore wind, especially for onshore projects under 50 megawatts, which run through local rather than national planning processes.

But the pace of Britain's offshore wind rollout will have to increase if the country is to reach its target of 40 gigawatts of installed capacity by 2030, up from 10 gigawatts in place today.

“It’s now vital that other shovel-ready renewable and low-carbon projects are also given the go-ahead as soon as possible. Delays of even just a month or so can set back big infrastructure developments by years in some cases. The U.K. has to go much further, much faster, if it’s going to reach its net-zero targets," said Vattenfall's Lane.

Offshore wind is considered a central pillar of the U.K.'s plans to become net-zero by 2050. The government believes there is the potential for 75 gigawatts of capacity by 2050. In 2010, the U.K.’s climate change plans used a figure of £75 to £120 per megawatt-hour for offshore wind by 2030. Last September’s auction yielded prices of £40 ($50) per megawatt-hour.

Scotland's slow-moving offshore wind market
The challenge looks especially acute in Scotland. Speaking at an industry conference in Glasgow earlier this year, Jim Smith, managing director of SSE Renewables, a U.K.- and Ireland-focused developer, said Scotland's progress over the past decade has been underwhelming.

“In 2010, we were talking about as much as 6 gigawatts in operation in Scotland, and the truth is we have less than 1 gigawatt  — a tenth of the U.K. installed capacity,” he said.

A new seabed leasing round for Scottish waters, including deeper sites for floating wind, was launched last month. That will open up new locations for developers to exploit.

The U.K.-wide tendering program is currently under review. The scale of the next auction round, tentatively scheduled for September 2021, will be the best yardstick of the government’s appetite to increase the pace.