Long-Term Energy Storage Solution Has Been Here All Along 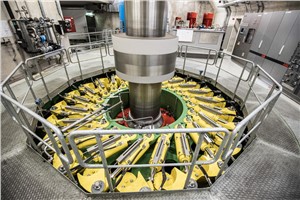 The most efficient energy storage technology may be as close as the nearest hill, according to former Energy Secretary Steven Chu, and almost as old.

“It turns out the most efficient energy storage is you take that electricity and you pump water up a hill,” Chu said Tuesday at the Stanford University Global Energy Forum.

When electricity is needed, you let the water flow down, spinning generators along the way. Pumped hydro can meet demand for seasonal storage instead of the four hours typical of lithium-ion batteries.

“There’s been a resurgence and a new look at pumped storage because it is the one thing we do have, and we know it works and lasts a long time,” Chu said, highlighting it first in a review of energy-storage technologies.

Pumped hydro takes advantage of the efficiency of converting electricity to mechanical motion using an electric motor, and converting it back again using generator.

“Round-trip efficiencies can reach as high as 85 percent,” he said. “In terms of energy storage it’s really one of the best.”

Chu has been touting pumped hydro as a backup for renewable energy at least since he served as President Obama’s first energy secretary in 2009. It can help renewables dominate the grid, he said, at least to 80 percent.

“First, the idea that we have all we need, we can go to 100 percent renewables—somebody’s smoking something,” he said. We’ll still need storage, he said, and there are many sites where water can be moved up and down hill.

“You don’t throw the water away, you keep it down there. So you’re just actually pumping between an upper and a lower reservoir.”

Chu also highlighted compressed air technologies that, like pumped storage, take advantage of mechanical efficiency. But he devoted most attention to pumped hydro. It’s main drawback, he said, is political.

“The problem with hydro is that it takes a long time to get permitting. There are a lot of certain types of environmentalists who are very much against hydro storage. Even if you have an existing dam and you put a pool below the dam that you can pump up and down, they’re against that as well.”

But if officials pursued pumped hydro now, it could be ready to provide 100-day energy storage by the time renewables own 80 percent of the grid.

“We’ll see how the public responds to (the question): ‘Would you rather have carbon-free energy and a few more ponds of water?’”

Tell a friend:
Long-Term Energy Storage Solution Has Been Here All Along