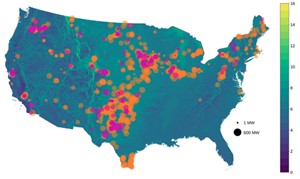 U.S. wind plants maintain 87% of peak performance after 17 years, and newer plants show almost no decline over the first 10 years, according to a recent study from Berkeley Lab. Compared to studies of how European wind fleets age, the U.S. wind fleet shows mild performance loss with age, and plants built after 2008 show the lowest levels of performance decline that have been found in a major fleet.

A team of researchers in Berkeley Lab’s Energy Analysis & Environmental Impacts Division analyzed the performance of 917 onshore wind projects in the U.S. Their findings were published recently in the journal Joule.

The U.S. wind market is the second-largest in the world and supplied 7.3% of the nation’s electricity generation in 2019, yet this is the first research effort to evaluate the impact of plant age on the performance of the U.S. wind fleet.

“The results indicate that age-related performance loss can be influenced by technology choices and cost-benefit decisions by project operators,” said Berkeley Lab scientist Dev Millstein, the corresponding author of the paper. “The study provides evidence that recent technology changes are positively influencing how wind plants age.”