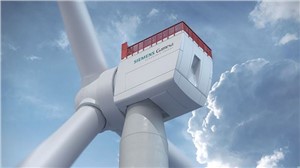 Siemens Gamesa Renewable Energy (SGRE) and Hai Long Offshore Wind (Hai Long) announce that the new SG 14-222 DD offshore wind turbine is intended to be used at the upcoming 300 MW Hai Long 2 project in Taiwan. The deployment of the turbine for the rest of the 1,044 MW Hai Long pipeline is also being considered.

The exact number of units for the first 300 MW of the project remains to be confirmed based on site-specific conditions. The preferred supplier agreement as published in November 2019 remains subject to contract and final investment decision from the consortium partners, Canadian independent power producer Northland Power Inc. and Taiwan-based developer Yushan Energy, jointly owned by Mitsui & Co., Ltd. in Japan and Yushan Energy Pte. Ltd. in Singapore.

The Hai Long offshore wind power plant was awarded through the 2018 grid allocation mechanism in Taiwan. The project site is located approximately 50 kilometres off the coast of Changhua County. The first 300 MW will serve as an anchor for Siemens Gamesa to expand its local footprint and supply base in Taiwan into a regional industrial hub.

As announced separately, nacelle production for the 300 MW Hai Long 2 project will begin in Taichung in 2024, and turbine installation will follow thereafter.

“Taking the next step in advancing the Hai Long 2 project by announcing that it will conditionally use the SG 14-222 DD offshore wind turbine is outstanding news. We are thrilled that the Hai Long partners have chosen our newest machine, and are very excited to work closely in making this project the first installation for the SG 14-222 DD in Asia Pacific,” said Andreas Nauen, Offshore CEO at Siemens Gamesa.

Since the opening of its Taipei office in 2017, Siemens Gamesa has been firmly committed to support the ambitious industry plan of the Taiwanese government, and to contribute to the growth of offshore wind in Taiwan. Subject to Hai Long 2’s Industrial Relevance Proposal approval, Siemens Gamesa recently revealed plans to expand its Taichung footprint into a regional industrial hub for offshore wind nacelles, together with Taiwan-based suppliers.

This nacelle production setup in Taiwan will play a central role in the introduction of the latest turbine technologies in Asia Pacific, starting with the giant SG 14-222 DD for the 300 MW Hai Long 2 project. As such it will also reinforce Taiwan’s pioneering position in the region and serve as a foundation to export state-of-the-art technologies to other neighbouring markets.

“We are very proud to be able and reveal the planned deployment of this giant turbine in Taiwan with the Hai Long partners. It matches our shared vision to establish a competitive and sustainable offshore wind hub here for the rest of the region,” added Niels Steenberg, Executive General Manager of Siemens Gamesa Offshore for Asia-Pacific.

David Povall, Executive Vice President for Development at Northland Power said: “The strategy of Hai Long’s Industrial Relevance Proposal (local content) has always been focused on enabling the local supply chain for global opportunities. And bringing the latest turbine technology into the Taiwan market through our project has been part of the initiative. Hence, we proudly see ourselves as the ‘Anchor Project’ that will facilitate Taiwan’s policy goal of becoming the APAC Offshore Wind Export Hub.”