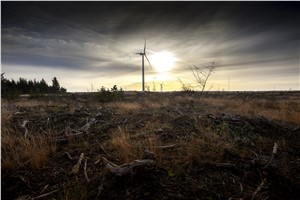 E-Connection, a Dutch wind project developer with more than 30 years of experience in developing, realising and managing complex wind energy projects, has placed an order for 11 turbines totaling 46 MW for the first phase of the wind project Oosterscheldekering Wind Optimization that consists of the four wind parks Binnenhaven, Roggeplaat-West, Noordland Buiten and Vluchthaven.

Located directly on the waterfront on a storm surge barrier in the Zeeland province in the southwest of the Netherlands, Vestas has developed a wind energy solution customised to the sites’ high wind conditions with average windspeeds of more than 9 m/s at hub height. The project is a mix of new turbines and turbines that replace older turbine types and in total it features nine V136-4.2 MW turbines and two V117-4.2 MW turbines with site-specific towers, combined with a 15-year Active Output Management (AOM 4000) service contract to optimise annual energy production and offer competitive levelised cost of energy.

Rick Wasser, Director of E-Connection states: “We appreciate partnering with a supportive partner like Vestas and collaborating with the province, municipalities, Rijkswaterstaat and environmental organisations. We are looking forward to commissioning phase one of this complex project in summer 2021, signifying a great step for the renewable power supply of the region. Collectively, from spring 2022, the turbines will generate as much wind power as 60,000 households in the Netherlands use annually”.

“This order comes from our valued customer E-Connection, with whom we have had a productive partnership for about 15 years in the Netherlands. This project re-enforces the success of the V136-4.2 MW turbine for the Dutch market being installed at the sea defense walls at the North Sea in one of the country’s best wind locations”, says Nils de Baar, President of Vestas Northern & Central Europe. “It emphasises our capability to provide customised wind energy solutions for complex projects that significantly contribute to achieving the sustainable energy goals of the Netherlands while at the same time create maximum value for our customer’s business case”.

Deliveries are expected to begin in the third quarter of 2021 and commissioning is planned for the same quarter.