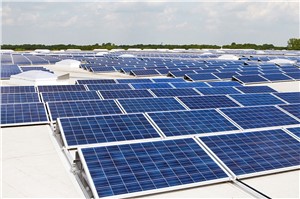 Canadian Solar Inc. (the "Company", or "") (NASDAQ: CSIQ), announced today that  ("CSIF") (TSE: 9284), listed on the  ("TSE"), will be included in a new Infrastructure Funds Index to be launched by TSE on . Canadian Solar Projects K.K. is the sole sponsor and Canadian Solar Asset Management is the asset manager of CSIF.

Dr. , Chairman and Chief Executive Officer of , commented, "We are very happy to learn that  (CSIF) will be included in the new Infrastructure Funds Index by the  (TSE). This event trails 50 years of  celebrations and reflects the growing importance of Environmental, Social and Governance (ESG) initiatives globally. We are proud to be part of ESG focused investment ecosystem. We want to Make the Difference in  as we continue our solar development worldwide."

opened its first office in  in 2009 and has since expanded its operations to 9 offices in 5 prefectures. The Company has successfully delivered over 5.5 GW of premium quality modules to its residential, commercial and utility-scale customers, including its own utility-scale projects.

started developing its own solar power plants in  in 2012, and has since developed, built and connected 297 MWp of solar projects, with an additional 63 MWp currently in construction and 218 MWp under development. Globally,  has built a strong track record developing and connecting over 5.6 GWp in solar PV plants.

In 2017,  launched the initial public offering of CSIF and listed its stock units on the TSE. CSIF was the first global IPO of a Japanese infrastructure fund. With approximately  of assets under management as of the end of , CSIF is a leading infrastructure fund player on the TSE and ranks among the largest listed funds on the TSE Infrastructure Funds Index in terms of market capitalization and assets under management. The  has assigned CSIF with a credit rating of A- with stable outlook in 2019, and the highest green rating ("Green1") grade in 2017.  has a 14.7% partial ownership in CSIF and intends to play a key role in its growth strategy.