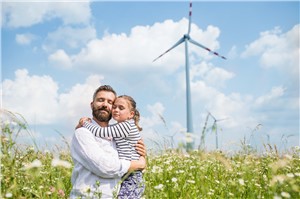 Committed to New England communities, Starion Energy is dedicated to selecting renewable energy from local sources like small hydropower from New England, run-of-the-river facilities in Connecticut, and select wind and solar power from Massachusetts. These renewables do not produce air pollution or greenhouse gasses that are traditionally associated with smog, acid rain, and climate change.

"While thousands of residential and small business customers across New England have already 'gone green' by using the competitive retail energy market to purchase renewable electricity through their electricity supplier, Starion Energy is now offering the ability for consumers to buy more locally generated renewable energy which makes a more direct impact in their own state and geographic region," said Duane Gereski, Director of Marketing.

With the New England Green Power Plan, customers can expect the same exceptional service from Starion Energy with no noticeable updates to their electricity utilities as everything is still connected to the same power grid. However, renewable energy replaces traditional energy sources with ones that are better for the environment and the region's future.

"Since the renewable energy we source is 100% locally produced, it is good news to Massachusetts and Connecticut jobs and the New England economy," said Duane. "Choosing our New England Green Power Plan helps support the development of new renewable energy projects, which puts people to work building and maintaining the sites that will power our region's future."

As Earth Day draws closer, Starion Energy is committed to creating a better, cleaner world through renewable energy sources. Renewable energy not only reduces the world's reliance on fossil-fueled power, but it also helps save depleting energy resources for a better tomorrow.

Switching to renewable energy is one of the easiest things that consumers can do to show that they care about their environment and want to conserve it for future generations. "To help do our part and to celebrate Earth Day," adds Duane, "Starion Energy will have 10 trees planted in a special location around the United States for every customer that signs up for our New England Green product on Earth Day, April 22nd."