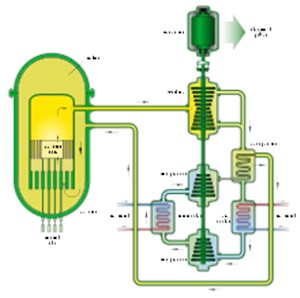 GE Hitachi Nuclear Energy (GEH) today announced that it will conduct a webinar for Canadian suppliers interested in providing material, equipment and services in support of the possible construction of its BWRX-300 small modular reactor in Canada. The webinar, scheduled for April 28, will be conducted in cooperation with the Organization of Canadian Nuclear Industries (OCNI).

The webinar will enable OCNI member companies including suppliers, manufacturers and contractors to learn more about the BWRX-300, GEH’s vision for a clean energy future and steps the company is taking to pursue licensing of its reactor technology in Canada.

“Canada is poised to play an important role in the deployment of the BWRX-300 SMR,” said Jon Ball, Executive Vice President of Nuclear Products for GEH. “We look forward to meeting with potential suppliers to discuss how they could support BWRX-300 construction and supply chain.”

GEH recently made its first submittal to the Canadian Nuclear Safety Commission (CNSC) for the Vendor Design Review (VDR) of the BWRX-300. The submittals addressed eight of the 19 VDR focus areas including general plant description, control system and facilities, research and development and design process.

Heather Chalmers, President & CEO of GE Canada will also participate in the webinar. GE has operated in Canada for more than 100 years and today has major manufacturing facilities and sales and service locations across the country. The company is investing in innovation across the country bringing together global expertise and advanced technology to address the challenges that businesses are facing in Canada and worldwide.

GEH is planning to conduct several supplier forums in Canada within the next 12 months and will invite all Canadian suppliers interested in potentially supplying goods and services for a BWRX-300 project.