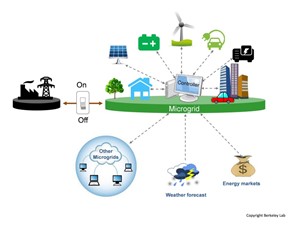 The report "Microgrid Market by Connectivity (Grid Connected and Off-Grid Connected), Offering (Hardware and Software & Services), End-Use (Commercial & Industrial, Remote, Instituites & Campuses), Grid Type, Pattern, Region - Global Forecast to 2025", is projected to reach USD 47.4 billion by 2025 from USD 28.6 billion in 2020, at a CAGR of 10.6% between 2020 and 2025. Rising demand for clean energy, increasing instances of cyberattacks on energy infrastructures, growing requirement for reliable & secure global power supply, and rising global deployment of microgrids for rural electrification are key factors driving the market growth. Furthermore, the expansion of renewable energy capacity of countries in APAC and government initiatives to encourage the development of microgrids are the opportunities for microgrid developers.

Solar PV power technology is used mainly in grid-connected microgrids. The growth of this segment can be attributed to the expansion of utility-based grid networks, coupled with the large-scale use of renewable sources of energy such as offshore wind. Grid-connected microgrids offer grid resiliency and improved quality power. They have a low impact on the environment.

The microgrid industry in APAC is projected to grow at the fastest CAGR during the forecast period. This growth can be attributed to the high rate of rural electrification in several economies such as India, Malaysia, and the Philippines. A large number of islands in Indonesia and the Philippines and the lack of proper electricity infrastructure in emerging economies led to the demand for cost-effective microgrids in the region as it has a large portion of unelectrified areas. This is expected to contribute to the growth of the microgrid market in APAC during the forecast period.