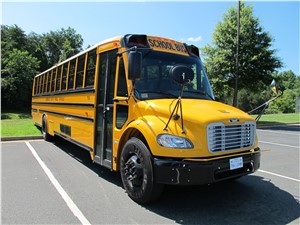 “EPA is partnering with the Bay Shore Union Free School District to scrap the older, dirty buses to ensure that they will not be put back on the road,” said EPA Regional Administrator Pete Lopez. “We are progressively reducing diesel pollution and will soon make that familiar black puff of smoke a relic of the past. Reducing air pollution from diesel engines has enormous benefits for the health of our children and our communities.”

“As school district and community leaders, it is imperative for us to model good citizenship to our young residents, and part of that means being good environmental stewards,” said Superintendent Joseph Bond. “The addition of these four electric buses will greatly reduce the impact of transporting our students to and from school, and will continue Bay Shore’s mission to reduce our overall carbon footprint. I would like to thank Suffolk Transportation for being such great partners with the school district, both in environmental stewardship and in keeping our most precious resource safe day in and day out. I would also like to thank the Environmental Protection Agency for providing the funding to make it possible for these buses to be added to the fleet at no additional cost to Bay Shore taxpayers.”

EPA standards for new diesel engines can make them more than 90% cleaner than older ones, but many older diesel engines still in operation predate these standards.  The Bay Shore Union Free School District’s buses currently use diesel-powered engines manufactured in 2001 and travel approximately 10,000 miles annually while releasing over 11 tons of pollutants such as particulate matter (PM) and nitrogen oxides (NOx), which have been linked to serious health problems such as aggravated asthma and lung damage. The all-electric school buses eliminate these pollutants, improving air quality for the school district’s 6,600 students and the surrounding community.

Bay Shore’s electric school bus project is part of the district’s initiative to partner with their current student transportation carriers to decrease the total amount of diesel pollution school-aged children are exposed to. The initiative is called C.L.E.A.N. B.U.S.E.S., which stands for Continuously Lowering Emissions and NOx Becoming Users of Sustainable Environmental Solutions Program.

School buses travel over four billion miles each year, providing the safest transportation to and from school for more than 25 million American children every day. However, exhaust from diesel buses can harm health, especially in children, who have a faster breathing rate than adults and whose lungs are not yet fully developed.