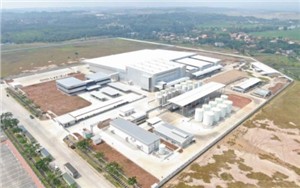 PT. Idemitsu Lube Techno Indonesia (Headquarters: Karawang Regency of West Java), an Indonesian subsidiary (90%) of Idemitsu Kosan Co.,Ltd. (TOKYO: 5019) (Headquarters: Chiyoda-ku, Tokyo; Representative Director and CEO: Shunichi Kito; hereinafter referred to as “Idemitsu”), established a new lubricant manufacturing plant (hereinafter referred to as “The Cikarang plant”) with an annual production capacity of 50,000 KL in Bekasi, Indonesia, to augment the supply for the increase in the demand for high-performance lubricants in Indonesia. The inauguration ceremony was held on November 7.

Indonesia has the world’s fourth largest population, and we are expecting a steady growth in demand. The existing first plant (The Karawang plant, Annual production capacity: 65,000 KL; Started production in 2005) is situated in the Karawang International Industrial City, where many related Japanese enterprises have their offices. Due to there being no expansion room in this area, the new second plant was established in Bekasi Regency, which is near the Karawang plant. The establishment of the Cikarang plant makes for a total annual production capacity of 115,000 KL in Indonesia by Idemitsu. The Cikarang factory is the seventh Lubricant Manufacturing Plant directly managed by our company, Idemitsu, overseas.

PT. Idemitsu Lube Techno Indonesia was founded on the investment of Idemitsu’s local partner, Atlas Petrochem Indo (hereinafter referred to as “Atlas”) in 2004, and supplies productions to Idemitsu Lube Indonesia, our fully-owned distributor, Atlas, and our overseas affiliates.

Idemitsu will continue to aim for the improvement and expansion of our business as a global supplier of lubricants as well as establish our community-oriented manufacturing and sales structure in Indonesia.