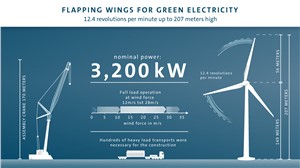 Volkswagen Group is making a further contribution to future climate protection. To this end, the company is also pressing ahead with the decarbonization of energy production. VW Kraftwerk GmbH is installing four wind turbines at the MAN Truck & Bus SE site in Salzgitter. The initial start of service is expected during November 2019. The new wind turbines are part of the energy transition. After their completion, they will contribute to a sustainable energy generation.

207 meter high wind turbines
The E-115 E2 3.2 MW wind turbines are supplied by Enercon. This type of wind turbine has been on the market for several years and, together with its predecessor model E-115 3.0 MW, has already been installed more than 1,000 times for customers according to Enercon. The wind turbines are 207 meters high and their hub height is 149 meters. The pre-construction preparation work at the site in Salzgitter began at the end of February so that they can go into operation later this year. The first step was to set up access roads and crane parking areas. Some of these areas are only needed for the construction of the wind turbines and will later be dismantled or resealed.

2,500 cubic meter excavation pit
To ensure that as few disturbances as possible occur on the construction site, the colleagues in the power plant planning department work closely together with their colleagues from MAN and the original equipment manufacturer Enercon.

Foundation construction for the four plants began in mid-April. For this purpose, 130 tones (metric tons) of steel and 1,260 cubic meters of concrete have to be placed in the 2,500 cubic meter excavation pit. The delivery of the concrete truck mixers has to be well coordinated so that the foundation can be concreted in one piece.

Now the construction of the tower begins
After the completion of the plant foundations, the tower construction begins. The first tower segments are delivered. The nearly 150 meter high tower of the wind turbine consists of 28 concrete rings (the lower part of which is composed of three individual segments) and a final steel section consisting of three steel sections. The assembly cranes, which are up to 170 meters high, can be seen from a long distance away. They suggest that something big is planned for here. The final assembly of the systems will then take place in August. The rotor blades are assembled with the nacelle and these components placed on top of the tower. Several heavy-duty cranes carry out this work.

Each rotor blade measures 56 meters in length
Regardless of anything, the assembly workers must be free of vertigo for working at lofty heights as the plant components are assembled with the aid of cranes. A single rotor blade measures just under 56 meters in length and the nacelle containing the engine house alone weighs around 300 tons. An elevator will be installed inside the tower, which the service personnel will use for repeated maintenance work in the nacelle. The systems will be regularly maintained and continuously monitored from a distance. At full load, the rotor rotates 12.4 times per minute and with that the wind turbine reaches its rated output of 3,200 kilowatts.