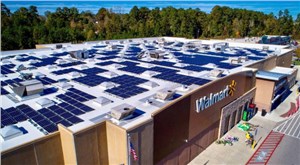 These agreements represent a tangible commitment by Walmart to achieve a goal of having 50% of its operations powered by renewable energy by 2025. The solar installations will produce more than 65,000,000 kWh of renewable energy annually, enough to power nearly 5,500 homes. The projects are expected to supply approximately 10%-60% of each store’s overall electricity use.

“Solar is a vital component of Walmart’s expanding renewable energy portfolio,” says Mark Vanderhelm, Walmart’s vice president of energy. “Walmart plans to tirelessly pursue renewable energy projects that are right for our customers, our business and the environment. These planned projects with C2 Energy Capital are moving us in the right direction toward our renewable energy goals.”

This deal comes one year after Walmart chose C2 Energy Capital to install 13 solar projects in South Carolina. The rooftop projects as part of this deal are all currently in operation, and a ground-mount project is under way at a Walmart distribution center in Laurens.

“Walmart is a seasoned expert at on-site solar generation, and they have high expectations for their vendor partners,” states Candice Michalowicz, co-founder and managing member of C2. “We are honored to be a part of their renewable energy program and the important steps they are taking that will benefit the local communities and the environment.”

Walmart has also issued its inaugural Environmental, Social and Governance Report, which reveals the company’s 6.1% reduction in Scopes 1 and 2 annual greenhouse-gas emissions in 2017 compared with 2015.