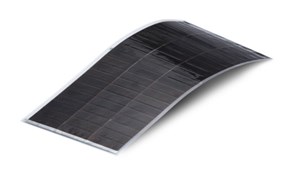 What:
HALE (High Altitude Long Endurance) UAVs and HAPS (High Altitude Pseudo-Satellites) are massive aircraft, often with wingspans as large as a Boeing 747, that rely on solar power to remain aloft for multiple weeks, or even months, at a time. The stratosphere, at an altitude of 20 kilometers (60,000 feet), poses unique engineering challenges to aircraft due to its harsh conditions. For these innovative aircraft to fly successfully, they require disruptive technologies such as new types of sensors, batteries, materials, software, and wing designs. Until now, solar technology designed specifically to meet the unique needs of these aircraft did not exist. Recently, however, Alta Devices announced its new solar product, Alta Devices Anylight™ Solar for HALE UAVs.

Alta Devices has a history of world-class innovation with its world record-breaking solar technology, designed to power autonomous systems. Its Anylight™ Solar for HALE UAVs technology is high efficiency, lightweight, and flexible. It extends endurance and range by providing more power to batteries, and can also power additional payload. This solar technology can be simply applied to aircraft surfaces. Alta Devices Anylight™ Solar for HALE UAVs is designed specifically to power stratospheric flight.

Why:
HALE UAVs and HAPS are an important new aircraft category and can include airplanes, airships, and/or balloons that are designed to fly at altitudes of 20 kilometers (60,000 feet) for extended periods of time. In addition to being used for a variety of communications (such as cell phone connectivity and others), these aircraft can be used for intelligence, surveillance, and reconnaissance (ISR), search and rescue, border patrol, mapping, and many other applications. Solar power is critical for these aircraft, particularly because the objective is to fly for years without refueling.

Flight at this altitude demands solar technology that is different from the type used in terrestrial installations or space. For example, at 60,000 feet, ultraviolet radiation from the sun is more intense than on the earth’s surface. Unlike in space with zero gravity, the generation of lift is important for stratospheric vehicles. In order to allow the aircraft to carry a useful payload and enough batteries for night flight, the solar technology used must be extremely light-weight. In contrast to both terrestrial and space applications, at 60,000 feet, mechanical stresses during flight can be very tough on the aircraft surface and solar panels, so the solar material must be flexible and durable.

Tell a friend:
Alta Devices to Reveal Its New Solar Solution for Stratospheric Flight at XPONENTIAL