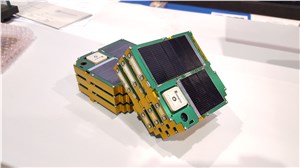 This week, the NG-11 mission will launch from the NASA Wallops Flight Facility carrying the Cygnus cargo spacecraft. This spacecraft will deliver supplies to the International Space Station (ISS) and transport 60 small satellites, called ThinSats, into space. These satellites are powered by Alta Devices gallium arsenide solar cells and will carry various electromagnetic, radiation and inertial sensors for scientific analysis of the atmosphere.

These ThinSats are part of a program whose goal is to set a new standard for STEAM (Science, Technology, Engineering, the Arts and Mathematics) education in the US. Dozens of teams of high school and college students were engaged in the preparation of the satellite hardware and analysis. The satellites will be deployed into low earth orbit and allow live data transmission.

In the future, these ThinSats can be deployed into constellations and expanded to larger sizes for hosting larger payloads.

Hank Voss co-founder of NSL states, “Satellites need solar cells to generate electrical power. Until now, no commercial solar technologies could match the improvement in cost, weight, and ease of use that other components of small satellite technology have achieved.” Specifically, he explained that the majority of solar cells were expensive, fragile, rigid, and difficult to encapsulate and robustly attach to spacecraft.