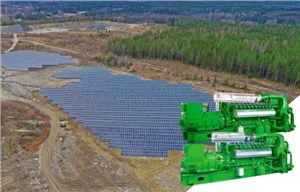 INNIO* announced today that it will supply six Jenbacher* gas engines for the LEMENE microgrid project in Finland, helping the Finnish government reach its climate goal of having 100 percent of its energy come from renewable sources by 2030. The LEMENE flagship project will be the largest energy self-sufficient business district using renewable energy in Finland. The combined heat and power (CHP) plant will enhance the security of the electricity supply in the Marjamäki area, located close to the city of Tampere, and the thermal energy will be used for district heating.

Located in the Marjamäki industrial area in the Lempäälä municipality, the LEMENE microgrid project will have a variable renewable energy source as twin 2-megawatt (MW) solar power plants. The six gas engines, with a total capacity of 8.1 MWs, are the key elements providing secure energy as the solar power production varies. The microgrid also comprises a fuel cell solution—providing a total of 130 kilowatts—and a battery to even out temporary fluctuations in energy production. INNIO’s three Jenbacher J416 and three Jenbacher J420 CHP units will run on natural gas or biomethane as available to make the gas engine a CHP carbon-neutral solution.

The entire system is expected to be commissioned by the summer of 2019.

With the European Union setting targets for a more sustainable energy supply based on renewables, each member country has set its own targets until 2030. CHP and district heating will provide a significant contribution to achieve Finland’s targets of national energy savings until 2030. Furthermore, Finland’s Prime Minister Juha Sipilä mandated the increase of the use of renewable energy to more than 50 percent during the 2020s and self-sufficiency to more than 55 percent.

By using INNIO’s Jenbacher gas engine CHP system, the LEMENE project will avoid 235 kilograms of carbon dioxide (CO2) emissions per megawatt-hour of electricity produced compared to electricity-only operation and heat provided by a natural gas boiler. The result is a reduction of 7,629 tons annually of CO2 if all six engines run a total of 4,000 operating hours per heating season.

The six Jenbacher engines will be installed at four different sites located in close proximity to each other, connected together with the solar plants, the fuel cells and the battery storage system to a microgrid system. The energy self-sufficient local grid operates mainly as part of the public electrical grid, but it can also operate as a supporting reserve system for the public electrical grid, or as an independent off-grid, on-demand system. The heat from the gas engines is provided to the local district heating network.

“Our Jenbacher Type 4 gas engines are energy-efficient options to generate electricity and utilize waste heat while reducing CO2 emissions with high reliability and availability. The LEMENE microgrid project is a unique and independent energy self-supporting plant that is an example of the future of power generation. With the growing biomethane availability, more and more of our gas engines are becoming a source for renewable, dispatchable power generation,” said Carlos Lange, President and CEO of INNIO.

The LEMENE project is one of 11 key energy projects in 2017 that have been granted an investment aid from the Finnish Ministry of Economic Affairs and Employment. The total amount of aid allocated for key energy projects in 2017 was €39.7 million of which the LEMENE project was granted €4.97 million. The Finnish government allocated a total of €100 million for renewable energy and new technology investments for 2016 to 2018.

INNIO’s Channel Partner for Jenbacher gas engines in Finland is Höyrytys Oy. The LEMENE project is operated by Lempäälän Energia Ltd., which is a subsidiary of and wholly owned by Lempäälän Lämpö Ltd. The former operates as a production company for the latter, producing district heating using solid fuels, such as peat, wood chips and sawdust.

* INNIO and Jenbacher are trademarks.