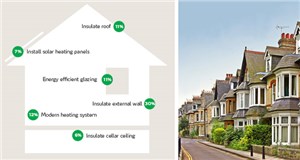 The European Local ENergy Assistance (ELENA) facility will benefit from EUR 97 million of new funding from the European Commission for its envelope dedicated to residential buildings. This budget will support project development services for energy-efficiency investments in privately and publicly owned housing. The European Investment Bank (EIB), which implements ELENA, will provide assistance and expertise and act as the point of contact.

The EU Member States agreed in December 2018 to reduce energy consumption by 32.5 % by 2030 as compared to 1990. This target, a central provision of the clean energy package, implies huge investments, especially in residential buildings, which account for around 40% of the EU’s total final energy demand. Accelerating energy-efficiency refurbishment of housing is therefore a key European priority and the main focus of the ELENA facility. The new funds dedicated to the ELENA residential envelope are fully in line with the targets of the Smart Finance for Smart Buildings (SFSB) initiative to make investments in energy-efficiency projects in residential buildings more attractive to private investors.

Project development services will mainly be directed towards households and homeowner associations with a view to increasing comfort and reducing energy bills. In addition, assistance may be made available to other organisations – e.g. financial institutions including commercial banks – to help them set up and deploy financial instruments and loan products for energy-efficiency improvements in the residential sector. Public entities may also be supported with the implementation of large-scale energy rehabilitation programmes in this sector.

European Commissioner for Climate Action and Energy Miguel Arias Cañete said: “ELENA is a great example of the effective use of public money. Every euro we have spent over the past years has attracted an additional EUR 40 in investments – for lower energy bills, greater comfort and lower GHG emissions. Consequently, we decided to fund up to 90% of the energy-related project development costs of the investments with ELENA. I want to encourage potential beneficiaries especially from central, eastern and south-eastern Europe to apply for the funds.”

Ahead of the Covenant of Mayors Investment Forum, EIB Vice-President in charge of energy Andrew McDowell added: “ Accelerating energy efficiency investments in residential buildings to reduce carbon emissions and better cope with a changing climate is crucial. Schemes around the world already show how technical preparation and financing can make a huge difference in attracting investment into building renovation. I warmly welcome the new support given by the European Commission. With the assistance of the EIB, this new envelope will significantly boost energy efficiency in buildings and thus improve the life of many European citizens.”

As ELENA celebrates its tenth anniversary this year, more than 80 beneficiaries have received financial support of over EUR 160 million, mobilising EUR 6 billion in investments. In one recent project, energy audits for residential housing in Poland are being funded. The grants are distributed via commercial banks to homeowner associations for preparing and implementing energy-efficiency investments in multi-apartment buildings.

Other projects include energy-efficiency and building-related renewable energy investment in Flanders, Belgium, in the province of Limburg in the Netherlands and in the city of Frederikshavn in Denmark. ELENA’s support in carrying out these investments will lead to energy and cost savings, while increasing the use of renewable energy sources in residential buildings, which will ultimately reduce greenhouse gas emissions.

The European Investment Bank (EIB) is the long-term lending institution of the European Union and is owned by the EU Member States. It makes long-term finance available for sound investment in order to contribute towards EU policy goals both in Europe and beyond. The EIB has committed at least 25% of its investments to climate change mitigation and adaptation, rising to 35% in developing countries by 2020. With EUR 16.1 billion for climate action in 2018, the EIB exceeded its target for the ninth year running. The Bank dedicated EUR 7.02 billion of its investment to energy efficiency and renewable energy in 2018, supporting the energy transition around the world.

On 19-20 February 2019 in Brussels, the EIB will be present at the Covenant of Mayors Investment Forum , with a stand and the following EIB experts available to answer your questions: