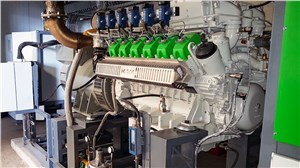 With the MAN E3262 LE202, MAN Engines has supplied their first natural gas engine to Mexican OEM partner Cysore SA de CV. This fledgling plant engineering company – which operates in the renewable energy industry – commissioned it for the first combined heat and power (CHP) plant to be built completely in Mexico. This CHP plant has an electrical power capacity of 470 kWmech thanks to the four-stroke petrol-gas engine from MAN Engines, complete with 12 cylinders and a 25.8 litre displacement. MAN Engines has been providing Cysore SA de CV with engines since 2015, although so far they have been used exclusively for biogas applications. The use of natural gas has become interesting since the deregulation of the Mexican energy market started gathering pace last year. With the help of MAN's natural gas engine, Cysore's new CHP plant has been supplying electricity and heat to a large food corporation in Celaya – the third largest city in the Mexican province of Guanajuato – since the beginning of October.

"Thanks to the engine's level of efficiency and reliability, MAN Engines has created the perfect solution for the Latin-American market. Globally, the company is also at the forefront of technology in terms of feasibility and technical support," asserts Israel Becerra Moreno, one of Cysore's founding members. The main challenge during implementation was the fact that the plant is situated 1,800 metres above sea level, where low air density can influence the combustion in the engine compartment. However, the engine generates the required level of power whilst simultaneously complying with NOx emissions standards of < 200 mg/Nm3 as per TA Luft (Germany's "Technical Instructions on Air Quality Control").