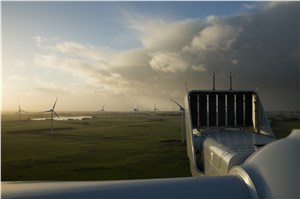 Vestas has received a 29 MW repowering order from the Danish utility company NRGi Renewables A/S for the Tagmark wind park in Thisted Municipality in northwestern Jutland, Denmark. The repowering project is derived from Denmark’s first energy-neutral auction held in November 2018.

The site currently consists of six V66-1.75 MW turbines, which will be replaced by eight V117-3.45 MW turbines delivered in 3.6 MW Power Optimised Mode that will more than double the annual energy production due to more efficient turbines. The project thus underlines Denmark’s large repowering potential from replacing older turbines with new and more efficient variants.

“Our strong partnership with Vestas on this project has enabled us to deliver the most competitive bid in Denmark’s first energy-neutral auction, which marks a significant milestone in Denmark’s green transition as it highlights that renewable energy projects are soon possible without any state subsidies,” says Jakob Bundgaard, CEO of NRGi Renewables A/S

The project is firmly rooted in the community, as the local owners of the current turbines will be part owners of the new project and 20 percent of the new wind park will be sold in shares to nearest neighbours.

“To partner with NRGI on this repowering project, which is derived from Denmark’s first energy-neutral auction, highlights onshore wind energy offers the lowest cost of energy and Denmark’s repowering potential. Denmark continues to be an important market for Vestas and the strong local commitment to this project underlines wind energy’s benefits for both our climate and the community”, says Christer Baden Hansen, Vestas Head of Sales Nordics