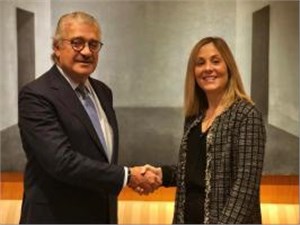 The European Investment Bank (EIB) has granted its first EIB Green Loan to Endesa. This financing aims to make it easier to invest in energy efficiency and renewable energy sources. Although the EIB has financed a number of projects of this kind in its long history of combating climate change, this is the first time it has described a loan in this way, thereby helping promoters such as Endesa to develop their decarbonisation strategy.

The EIB Green Loan will finance operations that are fully in line with the requirements set out in its Climate Awareness Bonds programme, and as a result is likely to be allocated to its portfolio of loan operations financed via the issuance of these bonds.

The EIB financing will also help achieve the objectives of the Spanish National Action Plan for Renewable Energies, which states that 20% of the energy used in Spain in 2020 must come from renewable sources.

Endesa was awarded 540 MW of wind energy and 339 MW of photovoltaic energy in the auctions for new renewable electricity generation facilities that took place in Spain in May and July 2017, which will involve an investment of over EUR 800m until 2020.

At the signing ceremony, Emma Navarro said: “Producing energy from renewable sources is a key element of the EU's strategy to tackle the challenge of climate change. The EIB is the largest multilateral financer of climate action, supporting projects like this one that contribute to the ambitious objective of cutting greenhouse gas emissions to zero by 2050 by investing in the transition to clean energies. Spain could become an excellent model for this sector and the EIB will help it to realise its full potential.”

José Damián Bogas Gálvez highlighted “the investment efforts that the company is making and will continue to make in renewable energies. This is a commitment that Endesa has made to drive a transition period enabling a move towards a fully decarbonised energy system by 2050.”

Endesa's wind farms and solar power plants will be built in various areas across six autonomous communities: Aragón, Castilla-La Mancha, Castilla-León, Extremadura, Galicia and Murcia. The project will also help to create jobs: the construction of the wind farms and photovoltaic plants is making it possible to employ 1 700 people to work on the project during the investment phase and up until implementation.