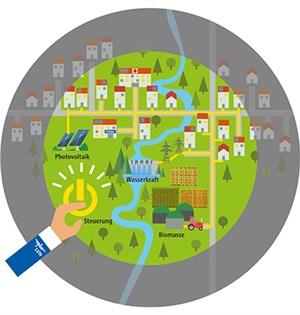 In November 2018, LEW Verteilnetz GmbH, MTU Onsite Energy and additional project partners from industry and science received the Bavarian Energy Award for the LINDA project. LINDA stands for local island power supply and accelerated grid restoration with distributed generation systems in the event of large-scale outages. In a number of field trials in an isolated network, a backup power supply concept based on renewable energy sources and MTU Onsite Energy CHP plants was successfully tested. The brand MTU Onsite Energy is part of Rolls-Royce Power Systems.

Securing the supply of backup power with renewables
The project background: a long-term, large-scale power outage can have serious consequences for nearly all areas of society like healthcare, IT, transport and traffic. Those involved in the project demonstrated that distributed generation units, such as photovoltaic systems, hydroelectric power plants and biogas plants, can be used to supply emergency backup power in the event of an outage. To this end, the project partners developed a concept and have now tested it successfully in what have been the most extensive field trials in an isolated grid in Germany to date: in three Bavarian communities, 1,100 households, 185 photovoltaic systems, two hydroelectric power plants and a biogas plant were interconnected in an autonomous islanded grid for a period of six hours. "In the course of carrying out the field trials, stable stand-alone mode operation was possible at all times," said Dr. Georg Kerber, project manager at LEW Verteilnetz GmbH.

The LINDA concept focuses primarily on the supply of emergency backup power for critical infrastructures, such as hospitals or drinking water supply systems. In the event of a power outage, they can be supplied with power from an islanded grid (microgrid) that is not connected to the national grid. Photovoltaic systems have not been used to provide a backup power supply to date, as these systems are dependent on an existing grid supplying a stable voltage and frequency. As a result of LINDA, such distributed generation units can now be made available to supply emergency backup power: a power plant with black start capability, in other words one that can start up on its own without the need for electric power, acts as the leading power plant and ensures that the frequency remains stable at 50 Hz. Due to the given power ratio this was performed by a hydroelectric power plant. The biogas plant based on MTU Onsite Energy gas generator sets was tested on its frequency stability. Photovoltaic systems thus recognise that a grid is in place and begin to supply the grid with electric power as if they were operating in a typical interconnected network. With the exception of modifications to the leading power plant, no retrofits to the systems are necessary. The concept can be applied quite well to other systems. LINDA is thus a key element in bringing about the energy transition and improving power supply reliability.

Project participants from industry and science
The project LINDA was developed and implemented under the leadership of LEW Verteilnetz GmbH, with partners from industry, such as MTU Onsite Energy GmbH, Bayerische Elektrizitätswerke GmbH, Stellba Hydro GmbH & Co KG, Marquis Automatisierungstechnik GmbH, PSI Software AG, and science, such as Augsburg University of Applied Sciences and the Technical University of Munich.