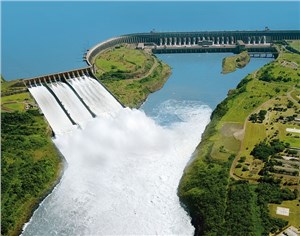 The GE (GE) consortium, established by GE Power and CIE Sociedad Anonima, has been chosen by Itaipu Binacional to provide electrical equipment for the early stages of the modernization project of the Itaipu Dam.

Located at the border between Brazil and Paraguay, reaching nearly 200 meters high and 8 kilometers long, the Itaipu Dam has a total power generation capacity of 14 gigawatts, enough to meet 75 percent of total Paraguay electricity needs and about 15 percent of Brazil at the same time.

Having produced more than 2.5 billion megawatt-hours (MWh) of power since 1984, Itaipu Dam is the largest hydro plant in the world in cumulated power and the second in terms of installed power. Recently, Itaipu Binacional has announced a 10-year program to modernize the plant, replacing obsolete equipment installed 30 years ago by more advanced technologies and machinery.

The three-year contract between the GE consortium and Itaipu Binacional will focus on the electrical modernization of the 24 overhead cranes, essential to lift the heavy equipment—such as hydro turbines—for the modernization. The lifting equipment, dating from 1984, has a lifting capacity from 10 up to 1,000 tons. For this mission, GE will provide AC motors, low-voltage drives and programmable logical controllers and encoders, which will help extend the cranes’ lifetime for another 20 years. This upgrade will be the first step of the global modernization project.

“Regarded as a great source of national pride, the Itaipu hydroelectric plant has produced more electricity than any other hydro infrastructure in the world. In 2016, it also set a new world record for annual energy generation with the production of 103.1 million MWh,” said Mauro José Corbellini, executive techinical director, Itaipu Binacional. “The modernization of this monumental site will breathe new life into the decades-old infrastructure, and the partnership with GE is the first crucial step to start the journey.”

“We are excited to be part of this vast modernization project, helping Itaipu Dam to improve its supply of energy and maintain its key role in clean energy generation for both Paraguay and Brazil. Our electrical equipment will help the 24 overhead cranes and gantries to operate effectively and safely, enabling them to bring together key plant equipment with precision and efficiency,” said Gagan Sood, CEO of Industry, Power and Wind segment, GE’s Power Conversion business.

“The one decade-long modernization project will help the Itaipu hydro plant to continue to provide colossal energy output. Electrification is our strength to perpetuate our commitment to develop hydroelectric energy as an efficient, viable and sustainable power resource, either via new builds or upgrades,” said Azeez Mohammed, president and CEO, GE’s Power Conversion business.

Tell a friend:
GE to Start the Modernization of One of the World's Largest Hydro Power Plants