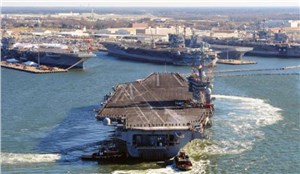 President Donald Trump on Monday signed into law a military spending authorization bill that includes a mandate to prepare and protect bases from floods, storms and energy supply disruptions from climate change — something Trump has said is a hoax. Adapting to climate change was a priority for military planners long before Trump’s election.

H.R. 5515, the John S. McCain National Defense Authorization Act (NDAA) for Fiscal Year 2019, includes language that directs the military branches to include in every installation’s master plan an examination of “energy and climate resilience.” That term is defined as “anticipation, preparation for, and adaptation to utility disruptions and changing environmental conditions and the ability to withstand, respond to, and recover rapidly from utility disruptions while ensuring the sustainment of mission-critical operations.”

The bill also directs the Defense Department to account for flood risks before starting new construction — a move that will affect roughly $10 billion per year in military construction spending, according to the Center for Climate and Security.

This new language, the first of its kind in a military spending authorization bill, represents a big step forward for the military’s efforts to prepare for climate change-induced storms, flooding and power outages, according to Shana Udvardy, climate resilience analyst at the Union of Concerned Scientists.

“For the first time, it is defining energy and climate resilience — that language is good,” she said. “It’s saying that the Defense Department needs to look at changing environmental conditions — you have to look at how we’re going to adapt."

While individual military bases have been installing microgrids and preparing for storms and floods on a case-by-case basis for years now, the new law requires every military base to take steps to protect against these disasters as part of their master plan.

That’s important, because military bases across the country are now threatened by rising seas and tidal flooding, said Udvardy. According to a 2016 report from the UCC, 18 military installations on the Atlantic and Gulf Coast could face hundreds of floods a year and end up being submerged by 2100. A three-foot sea level rise would threaten 128 U.S. military bases, valued at about $100 billion in property and infrastructure.

Congress and the military have been working on these challenges for some time, she noted. The defense authorization bill for fiscal year 2018, passed last year in a bipartisan vote, included language that accepts climate change is a “direct threat” to national security. It also included a mandate for the DOD to prepare a report on the vulnerability of military installations to climate change, which is due to be completed in December.

These preparatory moves will end up saving billions of dollars, the UCC contends, by assuring that military bases either don’t build in areas prone to the worst tidal flooding, or harden and elevate structures that are built there to withstand so-called “100-year” floods. According to a report from the National Institute of Building Sciences, federal spending on “natural hazard” preparedness and mitigation can yield an average $6 of value for every $1 invested, she noted — a metric that doesn’t apply specifically to military bases, but gives a rough sense of the value of preparing for climate change.

As for energy security, the U.S. military is already the country’s leader in microgrid development, with roughly one-third of U.S. capacity expected through 2020, according to GTM Research. Last year, assistant secretaries for the Army, Navy and Air Force made the case for continuing investments in military energy security — including the potential to replace or augment the thousands of backup diesel generators now at bases with more efficient and cleaner-fueled microgrids. The military is also expanding base microgrids to surrounding communities to power critical infrastructure such as hospitals and evacuation centers.

The military's focus on preparing for climate change has continued in the Trump administration. According to the Center for Climate and Security, at least 16 different top-ranking DOD officials, including Defense Secretary James Mattis, have raised concerns or offered plans to address climate change in the past 18 months.

At the same time, the concept of improving energy security and resilience for military bases is playing a role in the Trump administration’s efforts to bail out money-losing coal and nuclear plants across the country. That’s because the administration is planning to use the Energy Department’s authority under the Defense Production Act of 1950 and the Federal Power Act to force utilities to buy power from power plants deemed to be critical to national security, according to a memo leaked in June.

Power plants that serve military bases are the most likely ones to end up on any list that may emerge from DOE’s work on this still-unacknowledged plan. According to news reports last week, Anthony Pugliese, chief of staff for the Federal Energy Regulatory Commission, told a nuclear industry group that FERC is working with DOE, DOD and the National Security Council to identify plants that are critical to national security — an effort that could yield data that informs whatever plan may emerge from DOE in the coming months.