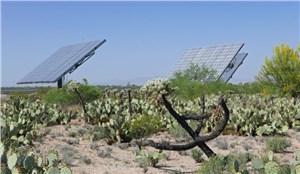 Arizona's politics over renewable energy have always been contentious. As the state considers adding new targets, this year is no different.

Arizona Public Service Company (APS), which services 1.2 million Arizonans in 11 of the state’s 15 counties, favors the ACC initiative and says the ballot measure would reduce its ability to choose the resources best suited to its customers. Ballot initiative supporters say the utility’s reliance on natural gas makes little sense in a state with copious solar resources. Commissioner Andy Tobin, the ACC member that introduced the initiative, contends his plan is an achievable way to modernize the state’s energy system.

All the parties are wrestling with what Arizona’s future should look like, and whether that future should be guided by utilities and regulators, voters and consumers, or all of the above.

“Through all the discussion that we’ve had, it’s important that we take a collaborative approach to all the energy decisions we make,” said Jeff Burke, director of resource planning at APS. “It’s not a good policy to say: here’s the plan, here’s the only way you can plan your energy system. You have to have a much more broad view.”

Next week, commissioners will consider energy standards in a meeting where increasing the state’s target could come up. Meanwhile, a challenge to the ballot initiative is working its way through state court. Arizona hasn’t increased its 15 percent by 2025 RPS since 2006.

Part of the controversy stems from disagreements about what exactly the ballot initiative would even mean for Arizonans.

In addition to the clean energy that it adds to the grid, APS estimates it would need to retire 2,500 megawatts of baseload resources. That includes the Palo Verde Nuclear Plant, the country’s largest nuclear facility and one of the cheapest to run.

Altogether, the utility said the capacity changes would double rates and add more than $1,000 to the average ratepayer’s bill over the course of the year. Tucson Electric Power hasn’t taken a stance on the initiative, but said it could add a total of over $500 to customer bills annually.

Conversely, a study from the Natural Resources Defense Council and consulting firm ICF found that a high renewables future would decrease electricity bills for the average Arizonan by $3 per month in 2030. The study quantified total electricity system cost savings at $4 billion between 2020 and 2040.

Another analysis conducted by Dr. Wesley Herche at Arizona State University looked at state renewable portfolio standards created between 2005 and 2012 and found no correlation between a higher RPS and utility rates. He noted that in some cases states that achieved a higher standard saw lower rates.

A separate assessment from NRDC and ICF also found that Palo Verde would stay open, and Arizonans could absorb its capacity, with a 50 percent RPS or in a situation where APS relies on expanded gas generation.

Burke called NRDC’s analysis “insufficient” and said it was based on “bad assumptions.”

“From a reliability perspective, they don’t have enough megawatts to keep the lights on in Arizona,” he said. “The way I look at this study — this is an impending blackout.”

NRDC’s analysis includes 9.26 gigawatts of capacity under the RPS, though it doesn’t quantify capacity from demand response and energy storage, while APS’s 2017 IRP calls for just over 13 gigawatts in 2032.

A legal analysis prepared for Clean Energy for a Healthy Arizona and conducted by attorney Sam Walsh, formerly of DOE, also assessed a possible Palo Verde closure tied to the ballot initiative. Walsh noted that APS would need agreement from the plant’s other owners and the eventual okay from the ACC.

A power struggle across state lines

The contentious RPS discussions indicate there’s still much disagreement about how fast a clean energy transition should happen, and who should control it.

The decision impacts more than Arizona. The fight has become a Western one, with political and environmental stakeholders joining sides that cross state lines.

Tom Steyer, the billionaire founder of NextGen America and progressive Californian, has thrown nearly $1 million toward supporting the initiative.

“We think that’s noteworthy for Arizona voters,” said Matt Benson, a spokesperson for a group opposing the initiative called Arizonans for Affordable Electricity, which is funded by APS’s parent company. “He is not going to have to live with the consequences of the law.”

The “forced closure” of Palo Verde further complicates the RPS discussions. While APS is the operating agent and majority owner of the plant, seven other utilities and load-serving entities across the west rely on its power.

One owner, Southern California Edison, said it had no position on the closure. Arizona’s Salt River Project, which gets 18 percent of its generation from “sustainable resources” including renewables, hydro and energy efficiency and would not be subject to the new initiative, referred Greentech Media to APS.

The other owners — including El Paso Electric Company, Public Service Company of New Mexico, Southern California Public Power Authority and the Department of Water and Power of the City of Los Angeles — did not return request for comment. APS said it wasn’t at liberty to answer whether it had discussed the closure with other owners.

APS contends a constitutional change is a misplaced attempt to reconsider the RPS. Burke said the ballot initiative is “bad policy” that doesn’t adequately consider the needs of customers.

The utility has encouraged the commission to move forward with Tobin’s plan, as it offers a longer timeline and more flexible ways to meet the goal, like nuclear generation. Burke said APS believes the ACC should be involved in deciding the energy mix over a change to the state constitution.

“This is far better than a mandated energy policy derived outside of any regulatory process that would be inflexible as technologies and customer expectations evolve,” the utility said in a statement. “We believe the best possible solutions are crafted through collaboration with our customers, regulators and other stakeholders, including business and community leaders.”

But ballot initiative supporters contend that the majority of Arizonans support more renewables, and so a vote to increase the RPS makes sense. A recent poll found that 75 percent of Arizona voters want to prioritize solar energy in the next decade.

“APS spends a lot of money talking about renewable energy,” said DJ Quinlan, a spokersperson for Clean Energy for Healthy Arizona. “But when you actually look at their plan … they really don’t have a lot of investment planned in renewable energy.”

In a July letter to fellow commissioners, Commissioner Boyd Dunn asked staff to open a rulemaking docket to “further explore, develop, and propose possible revisions to our Renewable Energy Standard and Tariff rules.” Dunn suggested Tobin’s plan would be considered under that docket, indicating the commission too is seriously considering a changed RPS and wants a hand in the decision.

APS’s current portfolio includes 12 percent renewables and 25 percent nuclear, adding to a total of 37 percent clean energy — depending on how you define it. Its latest integrated resource plan, from 2017, calls for an additional 5,387 megawatts of natural gas, 183 megawatts of renewable energy, and 397 megawatts of energy storage. By 2032 it projects 18 percent of its generation will come from renewables and 17 percent from nuclear.

Burke said the current IRP represents a “snapshot in time” and could change based on the economics of certain technologies. He declined to offer a preferred renewables target and noted “the mix is getting cleaner all the time.”

But Walsh suggested APS’ opposition could stem from a greater disinterest in significantly altering its IRP.

“This ballot measure is inconsistent with that plan,” Walsh said, referencing the megawatts of gas included in the plan. “That seems like a powerful fact.”
Movin?g forward

While opposing the ballot initiative, APS is moving forward on a variety of clean energy programs. Burke points to initiatives like its partnership with First Solar on a 15-year solar-plus-storage PPA.

“To the extent that we can add resources that are clean and make sense, we want to do that,” said Burke. “What we want to do is make sure that folks can afford electricity, that they can use air conditioning in the desert, and that they have reliable service. We also want to make sure we’re moving forward on clean energy.”

The First Solar deal emerged from an RFP requesting bids for summer power delivery only between 3 p.m. and 8 p.m. Eran Mahrer, First Solar’s vice president of markets, origination and government affairs, said APS’ strategy of asking for a need is a “good step forward” for clean energy in Arizona. The project is slated to come online in 2021.

APS opened another RFP for peaking capacity in April and one specifically for battery storage in June. Burke said those should be tied up by late 2018 or early next year.

As further measures of the utility’s commitment to innovation, he pointed to initiatives like a program that offers solar and a $30 bill credit to low-income homeowners and a project consisting of two 4-megawatt hour batteries that replaced transmission and distribution upgrades in a rural area northeast of Phoenix.

Though Mahrer recognized a maturation and evolution in utilities approaches to solar, he thinks more could be done to utilize the technology for essential grid services.

“We need to have a good understanding of what the capabilities of solar resources are, and then we need to have thoughtful procurement that engenders that outcome,” he said. “Thinking through Arizona specifically, assets that are contracted in a manner that embraces that flexibility would allow considerably more solar to go in Arizona period that could meet some of the peak demands that APS and other Arizona utilities have. It won’t fully meet it, but it will certainly meet portions of it cost-effectively.”