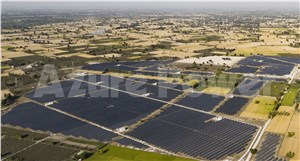 Azure Power, a leading independent solar power producer in India, announced that it has won a 200 MW solar project in Gujarat. With this win, the Company now has a total portfolio of ~470 MWs in Gujarat with Gujarat Urja Vikas Nigam Limited (GUVNL), making Azure Power the largest solar power supplier to the state. GUVNL has been rated AA- by ICRA, a Moody’s company, which is one of the highest rated state counterparties in India.

Azure Power will sign a 25 year Power Purchase Agreement (PPA) with GUVNL, at a tariff of INR 3.06 (~US$ 0.05) per kWh, which is 25% higher than the lowest tariff of INR 2.44 (~US$ 0.04) in the Indian solar market. The project will be developed by Azure Power outside a solar park and is expected to be commissioned in 2019. Azure Power has a long history of developing and operating solar power plants under the Gujarat Solar Policy 2009. Some of the first solar projects in India were built in Gujarat, given several advantages the state has including high levels of solar radiation, an extensive and stable electric grid network, and the strong credit quality of its DISCOMs. Azure Power developed and is operating India’s first MW-scale distributed solar rooftop project in Gujarat’s state capital city, Gandhinagar. In 2013, World Bank recognized this project as one of the Top 10 public-private partnerships in the Asia Pacific region.

Commenting on the occasion, Mr Inderpreet Wadhwa, Founder, Chairman and Chief Executive Officer, Azure Power said, “Winning this project is a historic milestone for us. We embarked on our mission to be a leading solar company with a 10 MW project with GUVNL and as we celebrate our 10-year anniversary, this 200 MW solar project win with GUVNL takes our portfolio capacity to over 470 MWs, making us the largest solar power supplier to the state. This achievement is a testament to our efficiency and reliability as a trusted solar power producer. We continue to demonstrate our strong project development, engineering, and execution capabilities and are delighted to make this contribution towards realization of our Hon’ble Prime Minister’s commitment towards clean and green energy, through solar power generation.”