This news is classified in: Sustainable Energy Power Generation 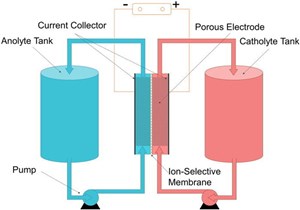 According to the new market research report, now available on ASDReports, "Flow Battery Market by Type (Redox, and Hybrid), Material (Vanadium, Zinc–Bromine), Storage (Compact and Large scale), Application (Utilities, Commercial & Industrial, Military, EV Charging Station), and Geography - Global Forecast to 2023", the flow battery market is expected to grow from USD 230.2 Million in 2018 and reach a value of USD 946.3 Million by 2023, at a CAGR of 32.7% during the forecast period. The growth of this market can be attributed to the increasing investment in renewable energy. In the recent past, developed and developing countries have been revising their energy policies to embrace a considerable portion of energy generation sourced from renewable energy resources that includes wind and solar. Currently, renewable sources have become the preferred choice for expanding, upgrading, and modernizing power systems across the world. Energy storage technologies such as flow batteries solve issues related to the mismatch between supply and demand and intermittency problems associated with renewable energy sources.