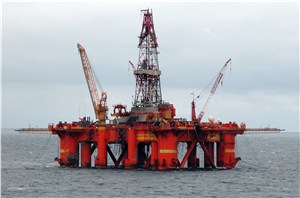 Based on the preliminary analysis of drilling results, Tortue-1 has intersected approximately 10 meters (32 feet) of net hydrocarbon pay in the lower Albian section, which is currently interpreted to be gas. This is in addition to the previously announced 107 meters (351 feet) of net pay encountered in the Cenomanian, which was the primary objective. The well was drilled beyond the primary objective to obtain deeper stratigraphic information and enable seismic calibration of the Albian, which will be tested in subsequent wells. Down to total depth drilled, no water was encountered in the well.

Located approximately 285 kilometers southwest of Nouakchott in 2,700 meters of water, and drilled with the Atwood Achiever drillship, the Tortue-1 well was drilled at a total cost of approximately $125 million to a total depth of approximately 5,100 meters. The Tortue discovery area has also been renamed Ahmeyim. Kosmos currently owns a 90 percent interest in the Ahmeyim discovery, along with Société Mauritanienne Des Hydrocarbures et de Patrimoine Minier (SMHPM) at 10 percent. Since 2012, Kosmos has held rights to conduct exploration in the C8, C12 and C13 contract areas under production sharing contracts with the Government of Mauritania. In March 2015, Chevron Mauritania Exploration Limited, a wholly owned subsidiary of Chevron Corporation (NYSE: CVX), acquired a 30% non-operated interest in the C8, C12 and C13 contract areas under production sharing contracts. Chevron has an option to elect to participate at a 30% interest in Ahmeyim, subject to Chevron paying a disproportionate share of their costs related to the Tortue-1 exploration well. The blocks are contiguous, range in water depth between 1,000 and 3,000 meters, and have combined acreage of approximately 27,000 square kilometer.