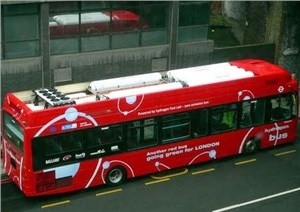 Ballard today announced that its customer, Van Hool N.V. (Van Hool), has signed a grant agreement with the EU Hydrogen Fuel Cell Joint Undertaking for deployment of 21 fuel cell buses in Europe as part of the 3Emotion Program.

Ballard and Van Hool, partners in the deployment of numerous fuel cell buses in Europe, are in the process of finalizing an equipment supply agreement (ESA) for the provision by Ballard of 21 next-generation fuel cell power modules. Ballard anticipates receipt of purchase orders under the ESA that will lead to delivery of these fuel cell modules to Van Hool in 2015 and 2016.

Randy MacEwen, Ballard’s CEO said, “This funding is another positive step in the scaling of fuel cell bus deployments in Europe and in our relationship with Van Hool, a leading European bus OEM. We continue to be encouraged by Europe’s ongoing commitment to zero-emission fuel cell technology for mass transit.”

Van Hool is a Belgium-based independent bus, coach and industrial vehicle OEM with an impressive history of innovation in bus manufacturing. There are currently 27 Van Hool fuel cell buses, powered by Ballard modules, in public transit operation and Ballard holds an estimated 80% share of the European market for fuel cell bus modules.

In November 2014 Ballard and Van Hool jointly launched a dedicated European Service and Parts Centre for fuel cell buses – called ESPACE – to provide support for Ballard-powered Van Hool buses. That same month Van Hool and four other major bus OEM’s signed a Letter of Understanding outlining their commitment toward the commercialization and deployment of fuel cell buses in European urban public transport, including their anticipation that around 500-to-1,000 fuel cell buses can be put into service in Europe during the 2017-20 period.

Filip Van Hool, CEO of Van Hool N.V. said, “With this new round of funding now in-place, we look forward to expanding our successful zero-emission bus partnership with Ballard to include the roll-out of buses in additional European cities.”

The EU Hydrogen Fuel Cell Joint Undertaking is a public-private partnership supporting research, technological development and demonstration activities in fuel cell and hydrogen energy technologies, providing subsidies for eligible projects through a cost share mechanism. Under Framework FP7, the European Commission and industry have each committed €470 million of funding for fuel cell & hydrogen research and demonstrations through the 2008-14 period. The next program, Horizon 2020, extends this initiative to the year 2020 with an incremental budget of €700 million, including 50% cost share from the industry.