The Disastrous Impact Of A Fracking Ban On U.S. Oil Production 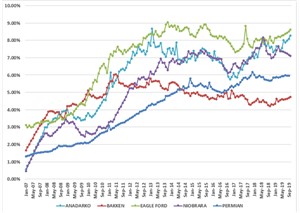 The economic impact of a fracking ban on shale oil would be somewhat different from the impact on the U.S. gas market, given that lower oil production can be much more easily replaced by imports. At least in theory.

As is the case with shale gas, shale oil wells tend to decline sharply, so that a fracking ban would quickly lead to much lower production. The figure below shows the decline rates for various shale oil basins, defined as the monthly drop in production from existing wells as a share of total production. The decline rate of the biggest shale producer, the Permian, has been relatively stable at 5-6% per month, while the oldest basin, Bakken, has stabilized at a lower level, presumably reflecting the existence of many more wells that are past their initial rapid decline phase.

Applying these decline rates to current production (and the EIA’s projected trend for 2020) yields the figure below, which shows that total shale oil production would decline by 8 mb/d over the course of two years (January 2021 to December 2022). This is perhaps slightly overstated (see note at end), and would be potentially offset by in part increased conventional oil drilling, but there would easily be an increase of 4 mb/d in oil imports by the end of 2022.  Even if oil prices did not rise, that translates to an additional $7.2 billion per month on the U.S. trade deficit.

This is an unparalleled amount, albeit coming at a time of weak oil markets. Still, given OPEC’s current spare capacity of 3 mb/d, which assumes no remaining constraints on Saudi Arabia due to the recent missile attacks on Abqaiq, the organization (and its allies) would be hard pressed to cover the shortfall. While a few countries, notably Iraq and Saudi Arabia, could theoretically launch crash programs to raise production levels, they would probably hesitate out of concern that the fracking ban would be eased, once the severity of its impact was realized.

In all likelihood, the U.S. oil production level (all liquids) would probably return to the pre-shale level of roughly 10-12 million barrels per day, meaning net imports of 8 million barrels a day or more. And if global oil prices ‘only’ rise to $80, the U.S. trade balance for oil would go from about $20 billion now to over $200 billion per year. This would be a major hit on the economy, weakening the dollar and increasing inflation, while consumers would see a loss of about $300 billion from their wallets.

It is almost inconceivable that such a drastic measure would be implemented, but there have been all too many instances of governments taking seemingly irrational steps in response to populist pressure. The decision of the German government to close the nation’s nuclear power plants after the Fukushima accident, triggered by a one-thousand year tsunami, something Germany has not experienced in recorded history, certainly stands out. A nation spending tens if not hundreds of billions of dollars on renewable energy has seen its greenhouse gas emissions increase just to satisfy the irrational fears of some of its citizenry.

Analytical note:  The likely trend in shale oil production after a fracking ban is a complicated interaction of the decline rates in existing wells which are of many maturities.  A research note describing the calculation will be published shortly.

Tell a friend:
The Disastrous Impact Of A Fracking Ban On U.S. Oil Production