Cost changes in projects on the Norwegian continental shelf 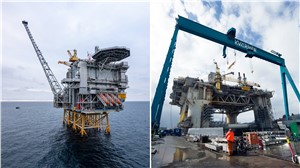 Equinor is the operator for 21 projects in the execution phase, with a total investment of around 210 billion kroner. 20 of these are on the Norwegian shelf or at Norwegian onshore facilities.
Production from the first phase of Johan Sverdrup started on 5 October, well ahead of schedule, while costs have been reduced by NOK 31.4 billion in 2019-kroner (40 billion in nominal kroner, based on a fixed exchange rate).

“We have started production from four fields on the Norwegian shelf in less than three months. In addition to the giant Johan Sverdrup field, we have also started operations on Trestakk, Snefrid Nord and Utgard. All have been delivered ahead of or on schedule, and most of them have reduced costs compared with the cost estimate in the plan for development and operation (PDO),” says Anders Opedal, Executive vice president for technology, projects and drilling.

In the state budget published today, the Ministry of Petroleum and Energy reports on the status of major projects that are currently undergoing development or have recently started operation.

Thirteen of Equinor’s projects are on this list. Eight of the projects have reduced costs since submitting their plans for development and operation, one project remains unchanged, while four projects have reported higher costs.

Two projects have seen an increase greater than 20 per cent, which is the standard range of uncertainty in PDO cost estimates. Since the previous report to the state budget, estimates for the Martin Linge project have grown by 7.9 billion in 2019-kroner. This project, which had already suffered significant delays and substantial cost overruns, was taken over by Equinor in March 2018.

“For Equinor, the most important thing is that we start up a safe platform. Martin Linge is a complex project, and the scope of work has increased. This means increased costs and somewhat more time before we can start production,” says Opedal.

Expected start-up is now in the third quarter of 2020. Last year Equinor communicated start-up first quarter 2020. More than 1 100 people are now working every day out on the field and onshore to get the platform ready for start-up.

“Hook-up and commissioning of Martin Linge is an enormous task, but both we and our suppliers are working diligently to complete our work so we can start up a safe platform,” says Opedal.

The work to upgrade the Njord A platform and the Njord Bravo storage ship has also been more comprehensive than expected. The Njord Future project entails an extensive rehabilitation to extend the lifetime of both the platform and the storage ship. This will enable the field to produce for another 20 years, and to accommodate new discoveries.

The cost increase of around 4.5 billion kroner (2019-kroner) is due to the need for more extensive replacements than expected, on both installations.

Tell a friend:
Cost changes in projects on the Norwegian continental shelf