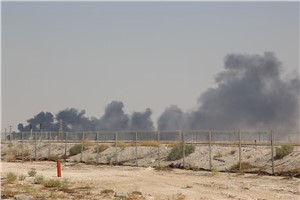 After an alleged drone attack struck a giant refinery and one of its major oil fields, Saudi Arabia’s Interior Ministry announced on Saturday that the government would shut-in half of its national oil production. At current production levels, that would amount to roughly 5 million barrels of oil per day, or 5% of global crude production, suddenly being taken off the market.

Though it was not immediately clear who launched the attacks, Houthi Rebels backed by Iran have reportedly taken responsibility for them. As reported by Fox News, a Houthi military spokesman claimed the group “launched 10 drones in a coordinated attack on the sites.”

Regardless of who is ultimately responsible for these most recent in a string of attacks on Saudi energy infrastructure, the question now arises how - and even if - global crude markets will react. Beginning in April, Iran and its surrogates have taken credit for repeated acts of aggression in the Persian Gulf region, attacking and even seizing oil tankers, and launching several previous strikes on Saudi infrastructure.

To this point, the collective reaction to all of these attacks by oil markets has been a big yawn, with little if any discernible impacts on crude prices. This has been a marked change from the past, when it seemed that the slightest hint of potential conflict in the Middle East would cause crude prices to jump by $10/bbl at the drop of a hat, a phenomenon I used to refer to as the “fear premium.”

But that has all changed now, in part no doubt because speculators have become numb to ongoing conflicts in the Middle Eastern region over the past two decades. But another factor is likely the new reality that the U.S. is no longer nearly as dependent on crude imports from Saudi Arabia, Iraq and other countries in the region as it was just a decade ago, thanks to the shale revolution.

It’s important to note here that none of those previous aggressive acts resulted in any significant reductions in the flow of oil onto the global market. Saudi Arabia’s announcement on Saturday means this incident is much more likely to send prices up, at least temporarily.

Will the “fear premium” return to oil prices? Observers in the U.S. will find out late Sunday, when trading begins on international markets.