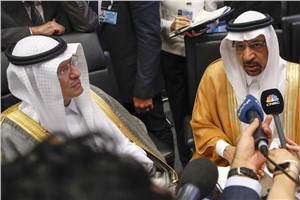 The oil market began the trading week this Monday (September 9) with a sense of what the late American professional baseball catcher Yogi Berra would describe as "Déjà vu all over again". For overnight, the world's largest crude exporter and OPEC heavyweight Saudi Arabia saw its leader King Salman replace the kingdom's sitting oil minister Khalid Al-Falih with one of his sons - Prince Abdulaziz bin Salman.

The move puts a member of the Saudi royal family directly in charge of energy policymaking for the first time in the Kingdom's history. The Prince Abdulaziz is Saudi power-broker and Crown Prince Mohammed bin Salman's older half brother.

Al-Falih's sudden removal makes the new appointee Saudi Arabia's third oil minister since May 2016; an office that was held uninterrupted by Ali Al-Naimi for almost 21 years prior to that before the latter was "sent to retirement" in a similar, sudden fashion.

Reasons for the sudden change of guard remain unclear, as the response of Al-Naimi and Al-Falih to declining oil prices - with the blessing of the crown - was worlds apart. Confronted with an oil glut and rising U.S. shale production, Al-Naimi wanted market forces to decide the outcome by keeping the taps open, resulting in oil prices falling below $30 per barrel in January 2016.

But by that summer Al-Naimi was gone, and Al-Falih, a former Saudi Aramco executive, arrived on the scene to not only push for price supportive OPEC production cuts, but to widen the scope of the output reduction to other major non-OPEC producers including Russia.

While Al-Naimi often voiced distrust and lack of cooperation with Moscow, Al-Falih was often seen tweeting photographs with his Russian counterpart Alexander Novak. The latter's charm offensive got 10 Russian-led non-OPEC producers to join hands with OPEC's 14 members to announce a joint production cut, a policy that currently rolls on to March 2020 with a joint output reduction level set at 1.2 million barrels per day (bpd).

But despite the divergent approaches, the oil price - using Brent as a benchmark - has merely moved from being just shy of $50 per barrel at the time of Al-Naimi's departure in May 2016 to lurking just above $61 at the time of Al-Falih's removal. Ironing out spikes and troughs, that's a net gain of less than $15 per barrel over the course of which Saudi production, accounting for for bulk of OPEC's headline volume, fell from 10.2 million bpd to 9.77 million bpd in August 2019, going by the latest S&P Global Platts survey.

The motivating force behind the ministerial kerfuffle, sidestepping the rancor surrounding Crown Prince Mohammad's rumored hunger for power, happens to be the much promised Saudi Aramco initial public offering (IPO), hints of which first surfaced months prior to Al-Naimi's removal back in 2016.

In April that year, Prince Mohammad said Aramco was likely to be valued at more than $2 trillion ahead of the touted sale of a less than 5% stake in the state-owned oil company via an IPO with a domestic float on the Saudi Tadawul stock exchange and an international listing on a "global exchange".

He added that Aramco would be transformed into an "energy company" with its subsidiaries listed as well; all proceeds of which would be turned into a "global investment fund with a size of up to $3 trillion dollars."

In the intervening years that global stock exchange sought by the Saudis has been rumored to be anywhere between New York, London, Tokyo and perhaps all else in between depending on the Kingdom's hunger for a high valuation for the so-called mother of all IPOs, and its comfort with disclosure and listing complexities an international float requires.

Much of it was, and remains, predicated on an oil price in the circa of ~$80 per barrel, something the Saudis privately acknowledge but never publicly comment on. Yet, for all the trouble including the output cuts having dragged OPEC's global market share below 30% and ongoing geopolitical tensions, the price is still nowhere near the mark courtesy buffer crude production stateside and rising exports of U.S. light crude.

Puzzling it is then, how Prince Abdulaziz's stewardship can bring about price level his predecessor Al-Falih, a loyal Aramco servant for over 30 years and its former Chairman, could not achieve despite an extensive production cut program, the scope of which extends beyond OPEC.

In his first public outing, at the World Energy Congress in Abu Dhabi on Monday, the new minister kept up the kingdom's old pretense by remarking: "We don't reflect on oil prices"; a customary Saudi quip few in the auditorium believed let alone the wider market.

And in an attempt at dry humor, Prince Abdulaziz added: "If I would be concerned about International Energy Agency (IEA) projections I would be on Prozac all the time." He'd better keep that handy, for the IEA has lowered its global oil demand projections for 2019 and 2020 to 1.1 million bpd and 1.3 bpd respectively in the wake of perceptions over crude call destruction caused by a possible global slowdown and the U.S.-China trade spat.

Additionally, several energy sector bosses, including the CEO's of BP and OMV, have started opining that 1 million bpd-plus global demand growth projections would soon be a thing of the past. Such sentiments also need to be squared against a 2.3 million bpd surge in output, as burgeoning U.S. shale barrels are being joined by incremental drums from Brazil, Norway and Canada.

Nothing suggests a short-term jump to $80 per barrel crude prices is imminent, barring an unlikely rash move of drastic, deep production cuts in excess of 2 million bpd. So while there may be a new Saudi Oil Minister, and King Salman is keeping the ministry literally within the family, OPEC and Riyadh's policy is unlikely to alter. Brent will in all likelihood lurk around ~$65, and Prince Abdulaziz's most important task might well be to hold that floor in 2020.