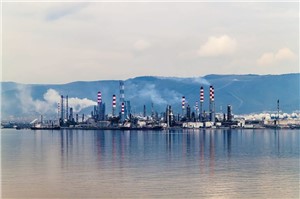 Natural gas prices in Europe are set to fall further below their lowest in a decade as suppliers show few signs of scaling back abundant deliveries.

Inventories are near capacity weeks earlier than usual and are being flooded with more fuel coming both from tankers and pipelines. While producers have reduced some flows with repairs and maintenance at gas fields and processing plants, the benchmark price for gas in the Netherlands is struggling to recover from a crash below 10 euros ($11) a megawatt-hour earlier this summer.

“In September, gas storage sites in northern Europe will be full, increasing the risk of a further downside in prices,” said Niek van Kouteren, a senior trader at PZEM, a Dutch energy company. “Under a certain price, producers would be forced to extract less gas. But at the same time, big suppliers such as Russia” are trying to increase market share.

The only way for European prices to recover would be to scale back flows from Russia or Norway or halt more arrivals of cargoes liquefied natural gas, said Norbert Ruecker, head of economics at Julius Baer Group Ltd.

Dutch month-ahead prices may drop another 20% in the autumn, he said. “If things turn out really bad, maybe the bear case is even lower.”

Russian energy giant Gazprom PJSC said last week that its exports to Europe will decline to 192 billion cubic meters this year, 4.5% lower than the record-high volumes in 2018. Its average gas price is also expected to fall 13% in comparison what it recorded last year.

Nevertheless, Gazprom looks unlikely to turn off the taps just because of low prices.

“When we have an opportunity, we make extra sales,” Mikhail Malgin, deputy department head at Gazprom Export, said on a conference call with analysts last week. “The market share per se is not our goal but rather a consequence of our actions”

While injections into storage sites have now slowed amid Norwegian maintenance and lower LNG receipts, reducing the probability that storage capacity is breached and the risk of a “full price capitulation,” continued stockpiling through October will keep prices under pressure until the winter season, Goldman Sachs Group Inc. said in a report Monday.

Prices would have to fall much further for producers to make significant output cuts, according to Ahmed Hammoudan, a senior gas trader at Dutch energy company Eneco.

“Big suppliers are not driven by price, but by revenue,” Hammoudan said. “Even if prices collapse, they might not be under pressure to reduce flows as they hedge operations. And these companies want to deliver volumes.”