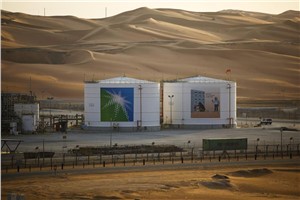 Corporate cash reserves of non-financial companies in the EMEA [or "Europe Middle East and Africa"] region soared past a trillion dollars in 2018, posting a double-digit percentage rise on an annualized basis.

Research by Moody's found corporate cash piles at EMEA non-financial companies to be at €1.1 trillion ($1.21 billion) at end-2018, up 15% from the previous year. The global rating agency attributed much of the rise in the regional headline figure to energy companies, many of which saw an increase in their lead with a jump to 21% share of total corporate cash holdings in 2018.

While oil prices have remained fairly range-bound in 2019, oscillating between a $50 per barrel floor and $70 ceiling, a key driver behind the overall rise in cash piles for 2018 was the relatively higher oil price compared to the year before.

Additionally, the 30% jump (to €260 billion) in cash held by the top 10 companies in the region, reflected most notably newcomer Saudi Aramco (with €43 billion), as well as German automaker Volkswagen, with the latter posting a cash holdings rise by €10 billion.

"Saudi Aramco's inclusion has tripled Saudi Arabia's share of the total EMEA corporate cash pile to 6% in 2018 and boosted the energy sector's already dominant share to 21% in 2018 from 17% in 2017," said Richard Morawetz, Senior Credit Officer at Moody's.

But the Moody’s report found a different story stateside with U.S. technology firms maintaining the top spot in 2018 with 48% share of total cash pile.

However, their percentage share was slightly down from 50% in 2017. Apple (rated 'Aa1 stable') and Microsoft Corporation (rated 'Aaa stable') were the top U.S. cash holders with $245 billion and $127.9 billion, respectively.

That remains far in excess of Saudi Aramco's EMEA-leading cash position and there are headwinds on the horizon. The outlook for oil prices is not looking too robust, and a general economic slowdown in Europe could curtail cash generation in some sectors. Meanwhile, Brexit could result in a temporary absorption of cash through higher working capital requirements due to stockpiling.

However, Moody's expects that companies will "safeguard" cash holdings and liquidity.